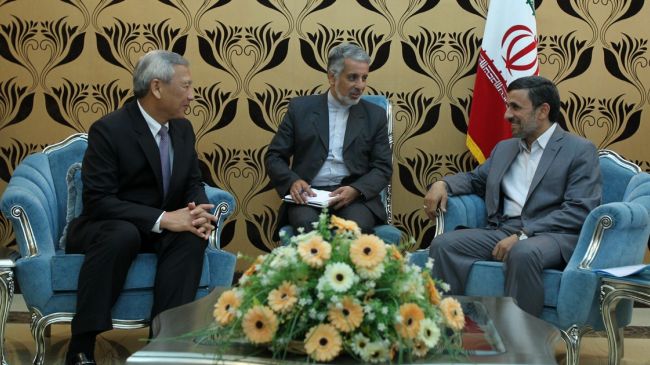 Iranian President Mahmoud Ahmadinejad has called for the further enhancement of ties between the Islamic Republic and Thailand in various fields, particularly in trade and economic areas.

In a meeting with visiting Thai Deputy Prime Minister and Commerce Minister Niwatthamrong Bunsongphaisan on Tuesday, President Ahmadinejad praised the historical relations between Tehran and Bangkok, and expressed confidence that both sides will work toward upgrading their bilateral relations.

The Iranian president said that Tehran and Bangkok share common global objectives, have had close cooperation on bilateral and international fronts, and will continue to work together closely in the future.

The Thai official, for his part, expressed his country’s willingness to expand relations with Iran in different areas.

He further said that his visit was aimed at enhancing the long-term cooperation between Tehran and Bangkok in various fields.

Earlier on October 2012, Chairman of the Executive Council of Iran’s Inter-Parliamentary Group Iraj Nadimi and President of Thailand’s Senate Nikom Wairatpanij called for the further promotion of ties between the two nations.

The call was made during a session held on the sidelines of the Inter-Parliamentary Union (IPU) meeting in the Canadian city of Quebec, where the two officials discussed mutual relations.