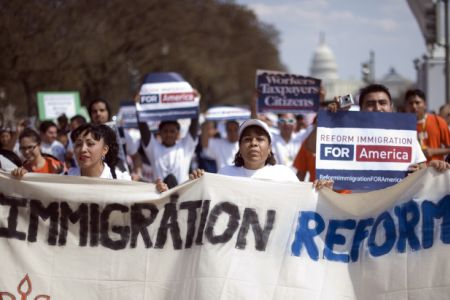 Tensions over immigration reform between the White House and House Republicans flared into the open Tuesday over the GOP’s commitment to an issue central to President Obama’s agenda.

White House press secretary Jay Carney criticized as “laughable” a claim by Speaker John Boehner (R-Ohio) that nobody had done more than him to fix the nation’s immigration system.

The House Republican chairman of the immigration subcommittee, meanwhile, attacked White House senior adviser Dan Pfeiffer as a “demagogic, self-serving political hack” for his criticism of an emerging GOP proposal.

The back-and-forth marked a departure from the careful tone that both the White House and Republican leaders had adopted on immigration in recent months, with Democrats growing increasingly impatient with the House’s slow-moving, piecemeal approach to the issue.

It also underscored the perilous path for the legislative push in the GOP-controlled House, which is likely to break for a five-week August recess without considering any immigration bills on the floor.

The House Judiciary Committee on Tuesday held an initial hearing on the legal status of immigrants brought to the US illegally by their parents. The panel’s chairman, Rep. Bob Goodlatte (R-Va.), and Majority Leader Eric Cantor (R-Va.) are crafting legislation to grant this limited population a path to citizenship.

But Democrats have warned that they would not support proposals that do not address all 11 million illegal immigrants.