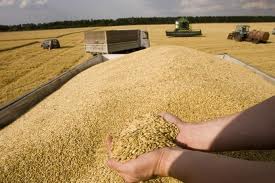 HAMBURG, July 23: Germany exported 66,000 tonnes of wheat to Iran in May 2013, continuing the trend of large shipments to the country in recent months, data from Germany’s statistics agency showed on Tuesday.

This brought total German wheat exports to Iran in the period between July 2012 and end-May 2013 to 1.153 million tonnes, agency figures showed. Germany had exported only 372,000 tonnes of wheat to Iran in the same period a year earlier.

The European Union and United States have imposed sanctions meant to discourage Tehran’s nuclear programme, which they say has a military purpose. Iran rejects these allegations and says its atomic work is peaceful.

Western sanctions do not target food shipments, but financial measures have frozen Iranian firms out of much of the global banking system, hindering payments for imports on which Iran relies for much of its food.

Despite the disruption caused by sanctions, Germany has been a major source of wheat for Iran.

Although substantial, the May exports were down from the 119,653 tonnes of wheat Germany exported to Iran in February and the 125,577 tonnes shipped in January 2013.