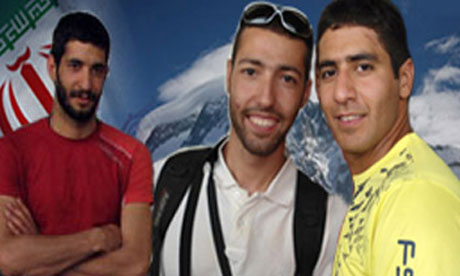 Fears grow for missing Iranian climbers after search called off

Iran is pursuing the fate of three climbers who have gone missing after successfully ascending the 8,051-metre (26,414ft) summit of the Broad Peak in north-eastern Pakistan.

Five Iranians participated in an international expedition to scale the Broad Peak, also known as the K3, the world’s 12th highest mountain in the Karakoram mountain range spanning the border between Pakistan and China, but three lost their way on descent.

The men, Aidin Bozorgi, 24, Pouya Keivan, 24 and Mojtaba Jarahi, 27, from the Arash Climbing Club in Tehran, are believed to have diverted from the standard return route after their successful ascent and become stranded with little water and food 7,500 metres above sea level, Iranian media reported.

The other two Iranians, Ramin Shojaee, the leader of the group, and Afshin Saeedee, are safe in base camp and did not accompany the three in their final ascent or their return to the camp.

Despite pessimism in Pakistan about the fate of the three, Iranian media have not lost hope and are urging governments to step up the mountain rescue.

The group managed to relay news of their plight soon after becoming stranded, which prompted Pakistani officials to dispatch search-and-rescue teams to find them.

Two days after the incident Bozorgi contacted his manager in his homeland through a satellite phone, saying the exhausted group had run out of food. His last call was on Saturday but Bozorgi’s voice was too feeble to be heard.

Iran’s foreign ministry spokesman, Abbas Araghchi, said on Tuesday that he had had no news of the missing men but remained optimistic.

“Our embassies in Islamabad and Beijing are pursuing the issue,” he said. “These three men have disappeared in mountains between Pakistan and China and our embassy in Islamabad has contacted local officials and co-ordinated the dispatch of rescue missions and helicopters to the area.” The height at which the men are missing is above the level helicopters could normally fly.

Pakistani officials are reported to have called off their rescue mission.

“For now the search has been called off. We have used all available resources to locate them but without success,” Naik Nam, of Adventure Tours Pakistan, told the Pakistani newspaper The Express Tribune on Tuesday. The Express Tribune said the company had organised the 11-member expedition.

“Even experienced mountain guides who took part in the operation are also losing hope as the hours go by,” Nam said.

Mehdi Rostampour, an Iranian sports journalist, said: “How is it possible for the Pakistani officials to call off the rescue mission on Sunday while Bozorgi managed to contact his manager in Iran as late as Saturday?” Rostampour said Iran’s mountaineering community had had a significant number of casualties in recent years.

Thomas Laemmle, a leading guide involved in the rescue mission, has written to the Arash Climbing Club saying his team believe the men are dead, Kooh News, an Iranian website dedicated to mountaineering, reported.

“More or less we will try to locate the bodies of the climbers for a maybe later evacuation,” he wrote in an email, according to Kooh News. “We believe all of them are dead sorry! I am actually somehow scared about our flights tomorrow [his last attempt] because we are flying at the limit of the helicopters when flying that high.”

Iran’s mountaineering and sport climbing federation has said that the Iranian group were acting independently. Before the expedition, Bozorgi wrote a letter that suggests the group were unhappy with the federation’s management.

The Iranians managed to ascend through a new route on their way to the top, called the “Iran” route.