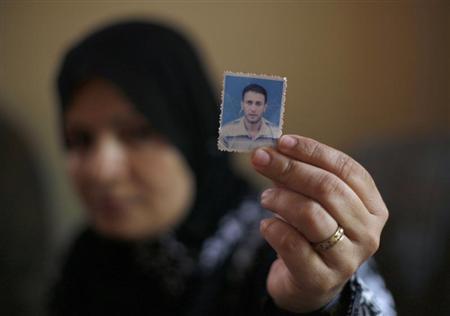 (Reuters) – A Palestinian secretly held by Israel after he vanished during a visit to Egypt last month was indicted on terrorism charges on Friday, though Israeli authorities kept a lid on how and where he was detained.

Any indication that Wael Abu Rida was seized on Egyptian soil, whether by Israeli undercover agents or in cooperation with Cairo, could fan popular hostility toward the Jewish state in the politically chaotic Arab power.

Israel says it has had Abu Rida, a former policeman from the Gaza Strip, in custody since June 21, roughly a week after his family said he disappeared while seeking medical treatment for his son in Egypt.

A court in the southern Israeli town of Beersheba charged Abu Rida with scores of offences, including attempted murder, belonging to a terrorist group and liaising with hostile foreign agents, linked to Gaza-based attacks on Israelis.

The indictment, seen by Reuters, said 35-year-old Abu Rida had for a decade been active in Islamic Jihad, a powerful Iranian-backed Palestinian faction that has on occasion challenged the authority of Gaza’s governing Hamas Islamists.

Both movements preach the destruction of the Jewish state.

Abu Rida’s lawyer, Mohammed Jabarin, indicated that his client would fight the charges.

Abu Rida’s confession to Israeli interrogators, which provided the basis for the indictment, was a “false version of events”, Jabarin told Reuters in Beersheba without elaborating.

Locked in an armed standoff with Hamas, Islamic Jihad and other Gaza groups, the Israelis have struck both inside the strip and further afield against targets suspected of being part of the supply line for rockets to the Palestinian enclave.

Jabarin and prosecutors at the hearing declined to discuss with the media the circumstances leading to his incarceration, citing a court gag order. The gag, eased on Friday, had previously barred any reporting in Israel about Abu Rida’s case.

Islamic Jihad denied any connection to Abu Rida and accused Israel of surreptitiously snatching him near Egypt’s Sinai peninsula border with Gaza – an allegation also made by Hamas, though neither faction has provided evidence for it.

“Wael Abu Rida is a Palestinian citizen who was kidnapped by the occupation (Israel) from another country. He had nothing to do with the Islamic Jihad movement and all these accusations are fabrications,” Islamic Jihad official Khader Habib told Reuters.

Abu Rida’s wife Amani, who accompanied him to Egypt, said a friend she did not know had telephoned him to ask him to come to Rafah, a town that straddles the country’s border with Gaza and is located just 7 km (4.5 miles) from Israeli territory.

After he left for the rendezvous, Abu Rida’s relatives did not hear from him again. They said they knew of no militant links he might have had. According to Amani Abu Rida, her husband lost his police job after Hamas took over Gaza in a brief 2007 civil war with the rival Palestinian Fatah faction.

As part of the Israeli-Egyptian peace treaty of 1979, the Sinai is largely demilitarized. The desert peninsula has seen spreading lawlessness, in parallel with political crises in Cairo, which has allowed radical jihadis to take root and facilitated Palestinian arms smuggling overland to Gaza.

Dubai accused Israeli spies of killing a Hamas arms procurer in the Gulf emirate in 2010. The next year, a Gazan engineer was abducted while visiting Ukraine and is now being prosecuted in Israel as a Hamas rocket expert – charges he has denied.

Any such actions in Egypt would be especially touchy, given widespread Egyptian resentment of Israel, although the two countries coordinate closely on security in the Sinai.

A foreign diplomat who has worked with both Israel and Egypt was skeptical of the possibility that the Israelis sent operatives into Egyptian jurisdiction to get Abu Rida.

“The stakes for both sides would just be too high if such an operation were to go awry or public,” the diplomat told Reuters on condition of anonymity, positing that Abu Rida might have been grabbed by the Israelis after being lured back to Gaza.

“If he was called back to Rafah, that sounds like it could have been a ruse designed to get him on the ‘right’ side of the border first,” the diplomat said.