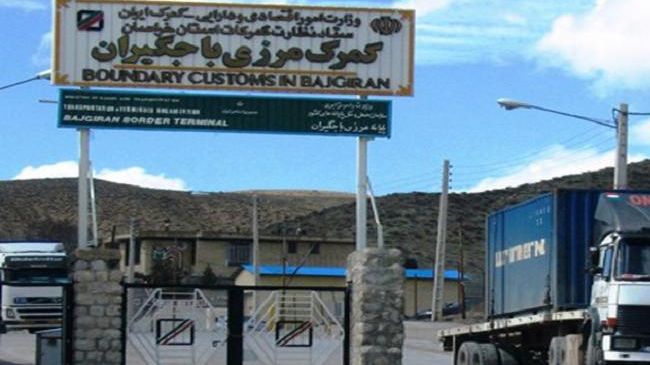 A view of the Bajgiran border crossing between Iran and Turkmenistan

The Islamic Republic of Iran and Turkmenistan seek to increase their trade exchanges to $10 billion in the near future as the two countries’ businessmen and merchants are considering a 100-percent growth in the value of trade exchanges.

The current value of annual trade transactions between Tehran and Ashgabat is $5 billion, while the figure stood at $1.3 billion in 2006.

A recent report by the Trade Promotion Organization of Iran on Iran- Turkmenistan trade relations shows that the two countries held six mutual cooperation meetings between 2001 and 2012.

The most important documents exchanged between the two countries were trade agreements on encouraging and supporting investment, agreements on avoidance of double taxation, and memoranda of understanding on business cooperation.

In July 2012, the foreign ministers of Iran and Turkmenistan signed a memorandum of understanding to increase trade volume and economic relations between the two countries.

“We will make our utmost effort to fulfill the wishes of the two countries’ presidents to improve the volume of trade and economic ties to $10 billion within the next years,” Iran’s Foreign Minister Ali Akbar Salehi told reporters at the time.