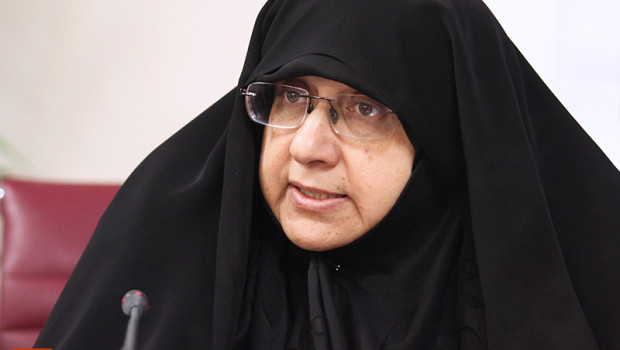 The Zeinab Society’s Secretary Azam Haji Abbasi said, “With the consideration of [Rafsanjani’s] guidance, we concluded that the precursor for the greater activity of women in various arenas, including increasing the number of female representatives in Parliament, is the creation of a non-partisan party.”

Another leading Society member, Masoume Rezaei, added, “We have introduced the proposal of [establishing] the Ministry of Women in order to address women’s issues in all arenas, and a Women’s Affairs Department must be established in all ministries.”

Rouhani had emphasized women voters and women’s rights during his election campaign.

Meanwhile, Sepah News — the official PR outlet of the Revolutionary Guards — took the unusual step of featuring an image of a woman on its website: the leader of the Basij Women’s Society Minu Aslani. Aslani announced that the Society had created over 100,000 circles of pious sisters who meet each week to discuss modesty and the hijab, and then discuss the issues raised in working groups. The report comes after Aslani announced in October that 50,000 Basij members had been trained to preach about chastity and the hijab.

PayPal Blocks Sale of Book With Word “Iranian” in Title

PayPal has blocked sales of a book because it has “Iranian” in the title.

The offending publication is Iranian Living Room by Fabrica, an Italian “research centre, studio, and school” linked to the Benetton fashion group. The collection of photos inside Iranian homes, taken by Iranian photographers, had no political intent but seeks to provide a glimpse of life in Tehran.

PayPal’s compliance with the sanctions regulations include screening to detect account holders and transactions that are not supported by the PayPal system for regulatory reasons. This includes screening for transactions which are for the benefit of “sanctioned entities” (i.e. entities which are searched on international lists to prevent financing of terrorism and money laundering) and screening against other internationally binding rules affecting local and cross border trade, as the case may be.

Fabrica was told could either change the title in the book listing or wait to see if PayPal could “whitelist” the account (but not the word “Iranian”).

Montanjabnia said the discussions would “undoubtedly produce results after which the party will officially resume its activities”.

He claimed political conditions had changed with the election of Hassan Rouhani in June: “There was no reason to continue this situation. Karoubi will be now easily released from house arrest.”

The National Trust Party has not formally been banned, but its offices were raided and closed in autumn 2009, soon after the disputed Presidential election.

Karroubi was detained in February 2011, amid the revival of protests, with fellow 2009 Presidential candidate Mir Hossein Mousavi and activist and academic Zahra Rahnavard. Karroubi’s wife Fatemeh was also held but released in the summer.

During his Presidential campaign, Hassan Rouhani said that the house arrests wre not in “our interest”:

We must stop this gap that is growing by the day. It is not difficult to create conditions in the country in the coming year so that not only are they released but that those who are in prison for the 2009 events too are released as well.

After his election, Rouhani has been more cautious:

Some issues are not exclusively in the hands of the administration and require the cooperation of all three branches of government. We will pursue this issue through deliberations, and the problem will be solved in view of the current conditions.