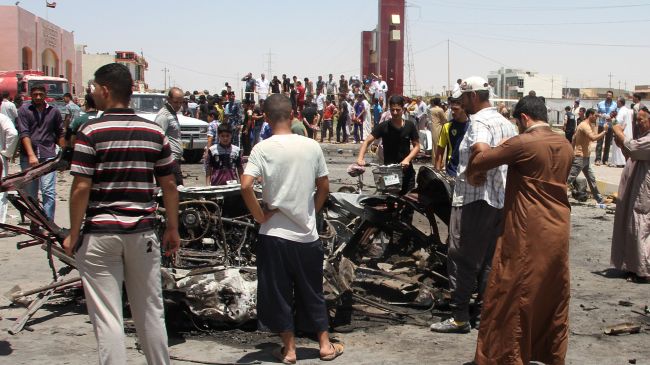 Six killed in fresh wave of attacks in Iraq

At least six people have been killed in a fresh wave of attacks that rocked Iraqi cities, as the country struggles to contain the worst violence since 2008.

On Thursday, a bomb blew off in the Dujail area, about 65km north of Baghdad, killing two farmers, a man and his wife, the Iraqi officials said.

Another farmer was shot dead by armed men near Balad, a city 80km north of the Iraqi capital.

Four other people were injured after a roadside bomb exploded upon the arrival of police officers at the scene of the Balad attack.

Meanwhile, three young men were killed when a roadside bomb went off in the Wajihiyah town in northeast of Baquba, the capital of Diyala province.

On Wednesday, four people were also killed in Wajihiyah in a bomb blast near a popular swimming area.

On July 15, four people, including a 10-year-old boy, were killed and 11 others wounded in a mortar shelling near Samarra, about 95km north of Baghdad.

On July 14, some 45 people were killed in central eastern and southern Iraq in coordinated bombing, mostly targeting Shia Muslims.

According to AFP tally, the recent attacks bring to 430 the number of people killed in Iraq violence so far in July and more than 2,690 since the beginning of the year.

Iraq has seen a surge in violence since the start of the year, with the United Nations reporting that more than 2,500 people were killed from April through June, the highest level since 2008.

No group has claimed responsibility for the attacks, but officials say the main suspects are militants linked to al-Qaeda.