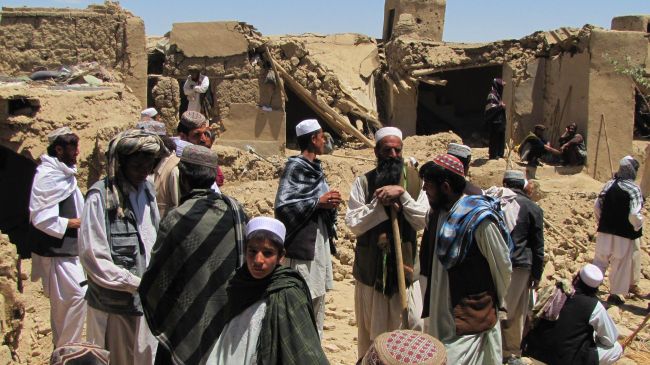 The incident took place on Tuesday after the 12-year-old boy detonated explosives planted in his bicycle while the Afghan and US-led forces were crossing the area.

The boy was killed and one Afghan police officer was injured in the attack.

According to eyewitnesses, two US vehicles were destroyed following the blast.

No group has claimed responsibility for the deadly incident. Afghan officials have blamed Taliban militants for the bombings, though.

Improvised explosive devices, including roadside bombs, are by far the most lethal weapons the Taliban militants use against Afghan forces, foreign troops, and civilians.

On July 13, a convoy of US-led forces hit an improvised explosive device in the eastern Nangarhar province. At least one tank was reportedly destroyed in the explosion.

On July 11, five people, including two police officers, were killed in twin bombings in Marja District in Helmand province.

The increasing number of casualties in Afghanistan has caused widespread anger against the United States and other NATO member states, undermining public support for the Afghan war, which began in 2001.

The United States and its allies invaded Afghanistan in the noted year as part of Washington’s so-called war on terror. The offensive removed the Taliban from power, but the country is still gripped by insecurity.