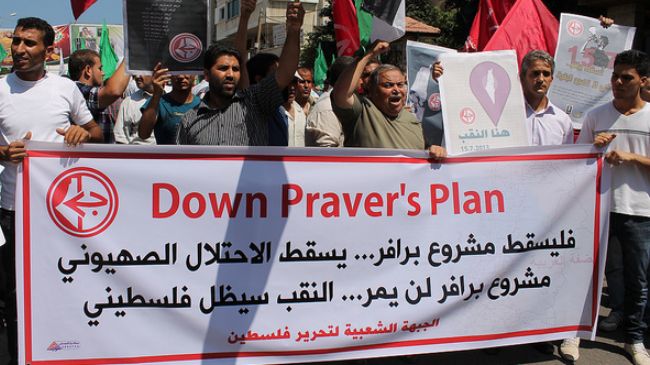 Over half of Israeli Arabs support call for new Intifada: Poll

More than half of Arab citizens of Israel support the call by a member of the Knesset (parliament) for an Intifada (uprising) in Israel in protest to the planned relocation of Bedouins living in Israel’s southern desert of Negev, a survey shows.

According to a phone survey conducted June 18 to 20 by Haifa University on 1,504 Israeli Arab adults, 58 percent of the respondents said they throw their weight behind an Intifada.

Forty-one percent of those surveyed said they are opposed to the call, while 1% had no idea.

During the heated debate in the Knesset on June 24 over the law which legalizes displacement of Bedouin people from the Negev Desert and their resettlement in nearby towns, Afou Agbaria got up to the podium and denounced the bill.

“I am in favor of a new Intifada, because you are causing a new Nakba in the Negev,” he said.

Palestinians refer to the May 15, 1948 occupation of Palestine as the “Nakba Day”, which means the Day of the Catastrophe in Arabic, to mark the expulsion of more than 700,000 Palestinians from their homeland in 1948.

The opinion poll also found that 63 percent of Israeli Arabs support Iran’s nuclear energy program, while 35 percent oppose with two percent having had no idea.