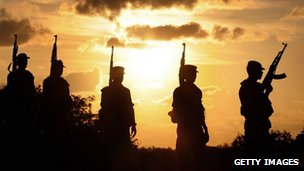 The UK government has approved more than 3,000 export licences for military sales to countries which it believes have questionable records on human rights, MPs say.

The House of Commons Committees on Arms Export Controls says the value of the existing export licences to the 27 countries in question exceeds £12bn.

This includes significant sales to China, Iran and Saudi Arabia.

The chairman, Conservative MP Sir John Stanley, said he was astonished at the scale and value of the licences.

There were, for example, more than 60 licences for Iran, including components for military electronics and what is described as “equipment employing cryptography”.

This appears to be a catch-all term which encompasses a variety of equipment, much of it in the telecommunications sector.

Similar equipment figured prominently in China’s £1.4bn worth of licences, which also included some small arms ammunition, even though there is a European Union arms embargo on Beijing.

Sir John told the BBC that in his view the EU embargo “was not drafted as widely as many people would wish”.

The report urges the UK government to look again at all the 134 existing UK export licences to Egypt to ensure that they do not breach the current policy, which is not to issue licences where it feels “there is a clear risk that the proposed export might provoke or prolong regional or internal conflicts, or which might be used to facilitate internal repression”.

This one licence granted in February 2013 accounted for well over 50% of the value of all existing licences to the countries in question.

The committees also comment on military sales to Argentina.

The UK has adopted a restrictive policy for such sales and the committees note that: “It is reprehensible that the UK government is unwilling to lobby other (friendly) governments to make the same changes in (their) arms export policies towards Argentina.”

The committees have asked the government to report back and give assurances that arms export licences to all the countries mentioned are in tune with policy.

The report concludes: “Whilst the promotion of arms exports and the upholding of human rights are both legitimate government policies, the government would do well to acknowledge that there is an inherent conflict between strongly promoting arms exports to authoritarian regimes whilst strongly criticising their lack of human rights at the same time, rather than claiming, as the government continues to do, that these two policies ‘are mutually reinforcing’.”

“Cryptography” is a term that appears frequently in the arms licensing data.

A Department for Business, Innovation and Skills spokeswoman said cryptography was “a means of ensuring information security, ie preventing unauthorised access to data”.

These commercial applications, she stressed did “not raise any concerns with respect to internal repression or conflict”.