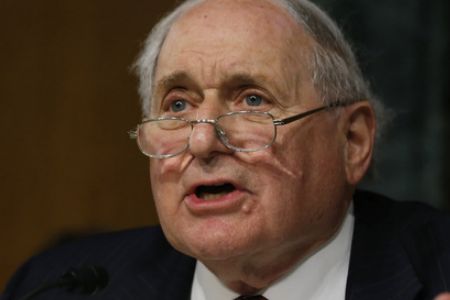 US senator calls for military strikes on Syria

A prominent U.S. senator has called on the administration of President Barack Obama to attack Syrian “airfields, airplanes and massed artillery.”

The influential chairman of the Senate Armed Services Committee, Carl Levin (D-Mich.) who has returned from a fact-finding trip to the Middle East, also expressed support for arming the militant groups fighting against the government of President Bashar al-Assad.

“Increased military pressure on Assad is the only way to achieve a negotiated settlement in Syria, which in turn is needed to restore stability to a region that certainly doesn’t need any more instability,” Levin said Wednesday during a speech at the Carnegie Endowment for International Peace.

Levin conceded that the U.S. public opposes an increased involvement in the Syrian conflict and that there is “no consensus” on the issue on Capitol Hill.

Senator Levin and Senator Angus King (I-Maine) spent five days in Jordan and Turkey, talking to government officials as well as U.S. diplomatic and military personnel about the conflict in Syria.

The two senators also met with militant leaders including Salim Idriss, the leader of the so-called Free Syrian Army (FSA), and visited refugee camps along the Syrian border.

In a joint statement on Tuesday, Levin and King said the U.S. and its allies should arm and train the militants and consider “options for limited, targeted strikes at airplanes, helicopters, missiles, tanks and artillery.”

However they said they were not calling for American troops on the ground in Syria.

The senators noted that “doing nothing may be the worst option of all,” potentially destabilizing U.S. allies in the region, including Turkey and Jordan, and threatening Israeli interests.

A recent opinion poll conducted by the Pew Research Center shows that the majority of Americans, 70 percent, are against U.S. involvement in Syria’s unrest.