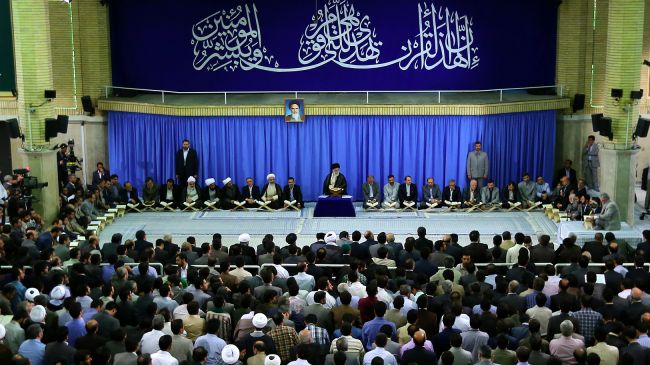 Leader of the Islamic Revolution Ayatollah Seyed Ali Khamenei at a ceremony attended by the reciters and memorizers of the holy Qur’an in Tehran, July 10, 2013

Leader of the Islamic Revolution Ayatollah Seyyed Ali Khamenei says the recitation and memorization of the holy Qur’an is a prerequisite to achieving an “ideal Qur’anic society.”

“Qur’anic guidance and an Islamic lifestyle should be dominant in an Islamic society,” said the Leader in a ceremony bringing together the reciters and memorizers of the holy Qur’an as well as Qur’anic scholars on Wednesday, marking the first day of the fasting month of Ramadan in Iran.

Pointing to certain efforts made to promote Western culture in other societies, Ayatollah Khamenei said adherence to the Western culture by the majority of the people across the world “does not constitute a model or [good] reason to follow this culture in an Islamic society.”

“Qur’anic guidelines and criteria should be followed in an Islamic society,” the Leader further underlined, adding that faith, common sense, and the sayings of Imams and prophets constitute Qur’anic criteria.

Expressing satisfaction with the growing interest in the recitation and memorization of the holy Qur’an among Iranian youth, the Leader urged all members of the society to read the Qur’an.

Also during the ceremony, the reciters and memorizers recited verses from the Qur’an.

Ramadan is the ninth month on the Islamic calendar. Muslims fast from dawn to dusk during the month, and refrain from eating and drinking, smoking, and indulging in anything that is in excess or ill-natured.