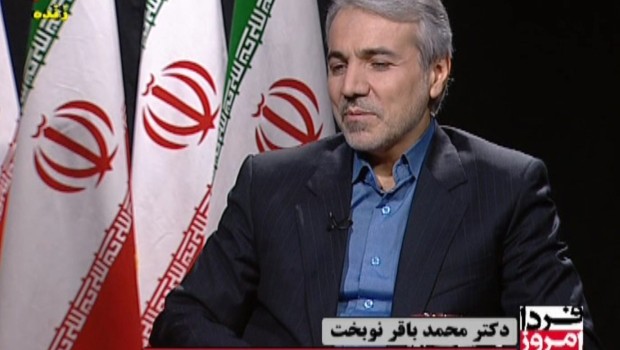 Khordad News asks whether four men — Mohammad Bagher Nobakht Haghighi, Mohammadreza Nematzadeh, Mohammad Nahavandian and Akbar Torkan— are the “keys to Iran’s safe deposit box”, i.e. whether they are the team President-elect Hassan Rouhani has assembled to provide expert advice and consultancy on his most pressing issue as new President — Iran’s faltering economy.

An economist, Mohammad Bagher Nobakht is secretary general for Moderation and Development Party and acted as spokesman for Rouhani’s Presidential campaign. He is also Deputy of the Economic Research Department at Rouhani’s Center for Strategic Research.

Rouhani has appointed Nobakht as his liaison to the Government’s legislative branch, with a mandate to “establish communication and moderation” between the legislative and administrative branches.

Mohammadreza Nematzadeh, a former Minister of Labor and Minister of Industry and Mines chaired Rouhani’s Presidential campaign. Like Rouhani, he studied abroad — his degree in Environmental Engineering is from California state Polytechnic University in 1968.

Akbar Torkan, a former Minster of Defense in Hashemi Rafsanjani’s government in 1989. An engineer, he has no ties to the Revolutionary Guards.

Mohammad Nahavandian is President of the Iranian Chamber of Commerce.