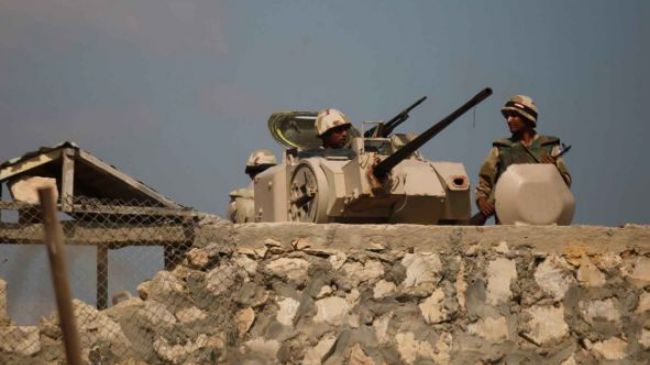 An Egyptian security checkpoint in in the Sinai Peninsula

Egyptian security forces have killed dozens of armed men and arrested hundreds more as part of a crackdown on extremist cells operating in the Sinai Peninsula, pan-Arab daily Al-Hayat reported on Thursday.

At least 32 Hamas fighters that entered Sinai through underground smuggling tunnels and joined the cells were among those arrested, according to the report.

Tensions flared between the Egyptian army and Hamas about a year ago, when armed men ambushed an Egyptian military base in Sinai, killing 16 officers. In recent months the Egyptian army has beefed up its presence along the border with Gaza, in an effort to shut down or destroy smuggling tunnels. Those operations have increased since the ouster of former President Mohammed Morsi, and there have been reports in recent days of severe gasoline shortages in Gaza.

Hamas officials have renounced involvement in any activities in Sinai, while Hamas leader in Gaza, Ismail Haniyeh, has declared several times that his organization would not interfere in internal Egyptian affairs.

Meanwhile, Egypt accused Iran on Thursday of “unacceptable interference” in its domestic affairs for having criticized the Egyptian army’s removal of Morsi last week.

The incident signaled a return to cooler relations between the two Middle Eastern powers after an attempt at rapprochement under Morsi, who hails from the Islamist Muslim Brotherhood.

Iran on Monday called the ousting of Morsi after mass protests against him a “cause for concern” and suggested that “foreign hands” were at work in the Arab state.

Egypt shot back on Thursday, expressing “extreme discontent” with the Islamic Republic’s comments and saying they reflected a “lack of precise knowledge of the nature of the democratic developments Egypt is witnessing”.

“This represents unacceptable interference in Egypt’s internal affairs,” the foreign ministry said in a statement on its Facebook page. Egypt made similar remarks to Turkey after its Islamist-rooted government criticized Morsi’s ouster.

Western states have been cautious so far in characterizing the military overthrow of Morsi. Washington has specifically avoided referring to it as a “coup”, a word that would force it to halt aid including $1.3 billion per year for the army.

Relations between Egypt and Iran broke down after the 1979 Iranian revolution, when Egypt gave sanctuary to the deposed shah. Many Egyptians harbor strong feelings against Iran.

Morsi tried to improve ties after he was elected in 2012. Former Iranian President Mahmoud Ahmadinejad visited Cairo in February, the first visit by an Iranian leader in more than three decades.

Egypt historically has much stronger ties to Gulf Arab states who have vied with Iran for regional influence. Kuwait, Saudi Arabia and the United Arab Emirates provided Cairo’s cash-strapped government $12 billion in aid this week.