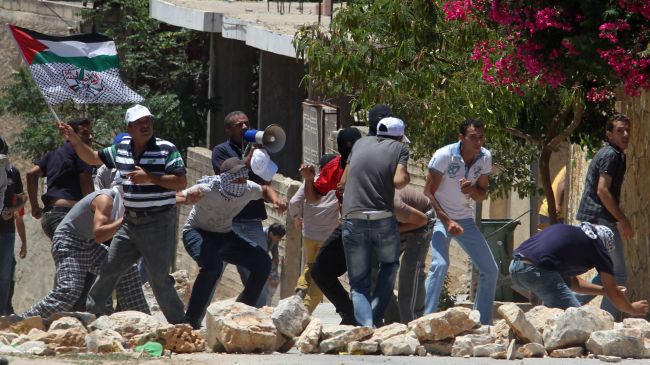 Palestinian demonstrators take cover during clashes with Israeli security forces following a protest against the expropriation of Palestinian land by Israel in the village of Kfar Qaddum, near Nablus, in the occupied West Bank, on July 5, 2013.

Two Palestinian female activists have been put on trial in an Israeli court on charges of instigating in a demonstration against Israeli regime’s illegal settlement expansion in the West Bank.

On Tuesday, the women known as Nariman Tamimi and Rana Hamadeh went on trial in an Israeli military court over entering a “closed military zone” during a demonstration in Nabi Saleh village on June 28.

Earlier this week, Amnesty International issued a statement saying that “They (the two activists) have been denied the basic human right to peacefully protest over land illegally seized by Israeli settlers, and the Israeli judiciary has used spurious legal tools to punish them.”

On June 6, two Palestinian women were wounded in an attack by Israeli regime forces on a group of demonstrators protesting against the illegal settlement expansion near the city of Al-Khalil (Hebron) in the occupied West Bank.

The Tel Aviv regime continues expanding its illegal settlements in the occupied Palestinian territories, despite calls from the international community to stop the move.

Meanwhile, Israeli settlers beat several Palestinian farmers in the town of Huwara in the occupied West Bank on Monday.

The Israeli settlers also stole 300 sheep from the farmers and attempted to bring them back to their illegal settlements.

In recent years, Israeli settlers in the West Bank have often assaulted Palestinians and vandalized their property. However, the Tel Aviv regime rarely detains the assailants.