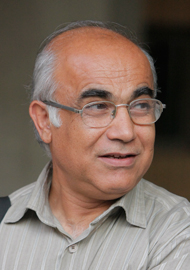 Prominent Iranian writer Mohammad Reza Yousefi has been rewriting ‘Shahnameh’ for children and teenagers. 20 volumes of the series were marketed so far, while the writer has prepared 17 other books for publication.

IBNA: The complete collection will hold 100 volumes of which 37 have been written, Mohammad Reza Yousefi said.

The House of Literature has marketed 20 volumes to date and 17 other books will be distributed soon, he added.

Mohammad Reza Yousefi was born in Hamadan, Iran, in 1953. With over two hundred titles to his name, he is one of the most prolific authors of children’s and young adult books in Iran.

He has received many prizes and a number of his texts have been adapted for children’s and young people’s theatre. He has twice received the IBBY Diploma, and in 2000 was nominated for the Hans Christian Andersen Award.

Shahnameh (Grand Book) is a classic among epic Persian poetry and recounts Iran’s mythical and historical past. It was written in Persian at a time when Arabic was the main scientific and literary language of Iran.

The book is composed of about 55,000 couplets and recounts Persian history and mythology from the earliest times to the fall of the Persian Empire in the 7th century CE.

Shahnameh has been one of the greatest inspirations of Iranian people in life and arts and among the first Persian manuscripts to be illustrated.