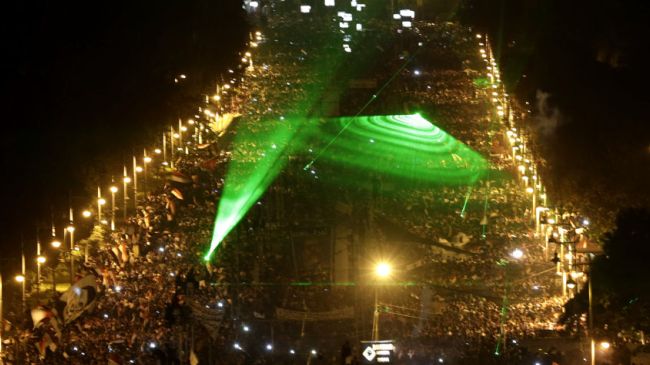 Press TV has invited Sherif Rizk, a political analyst from Cairo, to its Debate program to ask his opinion about the latest state of affairs in Egypt.

Following is an approximate transcription of the interview.

Press TV: Mr. Rizk, how do you see the situation? Our other guest has said that basically, this new, this interim, government lacks legitimacy because President Morsi was a democratically elected president and now the situation is extremely tense because of the coup that has taken place. Your take sir?

Rizk: Yes, first of all I just cannot understand why he calls Morsi legitimate. I mean legitimacy is not something that you take for granted, you have to earn it. He got [elected] actually, through elections, that is true, but then he, kind of, worked against legitimacy when he declared himself a dictator by canceling the first amendment of the constitution and started working with his own, telling nobody could review me, and then the second thing, he overthrew the public attorney (attorney general) and this was against the constitution. I cannot call him legitimate.

When he ignored them, people headed out to the streets, so the army in order to prevent a civil war just asked him to step down, so I cannot see that…, even when the former President Morsi says that only 130,000 people are in the streets, I think, he was quite unaware of the situation or he was trying to ignore it and it cannot be ignored because till now people are heading out on the streets, they are [in] millions and they are against all types of dictatorship and if ever somebody comes and tries to …

So the side that is using violence and, actually, I wonder…

Press TV: Mr. Rizk, a very delicate situation is now set up. We saw that on Saturday, suddenly we heard that prime minister, the interim prime minister, was going to be Mr. Mohamed ElBaradei and then we saw sort of a switch and saying, basically, that the prime minister has not been selected basically because of opposition by the al-Nur group that is involved in this coalition.

Can this wide range of people, actually, work together in order to make a smooth transition in the situation overall in the country now?

Rizk: Basically this is the kind of thing that is happening at the beginning of anything new, so they are just trying to get people around and get all their ideas about it and we are not looking for, specifically, Mr. ElBaradei; however, he is very qualified to hold the position but anyone who has got the abilities and the qualifications and it is kind of, agreed upon, by all the people that he might be a good candidate but this is not the idea at all, that we have to insist on ElBaradei or somebody else.

The opposition from al-Nur Party to Mr. ElBaradei is quite strange because on what basis…, qualification basis or ideology basis? And I think that if we always cling to that idea of ideology, we will go nowhere. So we have to think in terms of qualifications and the abilities to hold the position.

Mr. Baradei or anybody else could hold the position, we have got lots of that in Egypt and got so many people who are qualified that have been, actually, marginalized by the former President Morsi.