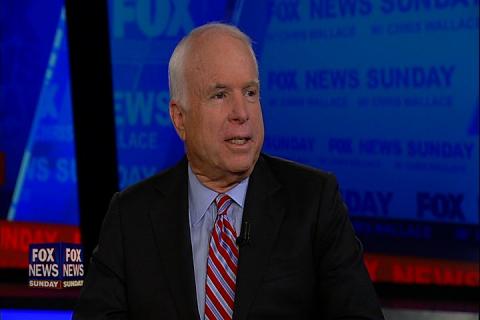 US must avoid repeating past mistakes: McCain

U.S. Republican Senator John McCain has called on the Obama administration to stop hundreds of millions of dollars in aid to the Egypt military, saying Washington must avoid repeating “past mistakes.”

The request came on Friday, two days after the Egyptian military overthrew the democratically-elected government of Mohammed Morsi in a coup.

“We have to suspend aid to Egyptian military because the military has overturned the vote of the people,” McCain said.

“We cannot repeat the same mistakes that we made in other times of our history by supporting removal of freely elected governments,” added the Senator, who is also a member of the Senate’s Foreign Relations Committee.

After Israel, Egypt is the second biggest recipient of US foreign assistance, with $1.3 billion directly going to the Egyptian military.

US officials, including the president, have carefully avoided using the work ‘coup’ in reference to the military’s toppling of Morsi, knowing that according to American laws, foreign aid to other countries will be cut off if democratic governments are overthrown by the military.

Former House Foreign Affairs Committee Chairman Howard Berman, who opposes a cutoff of aid to the Egyptian military, says “Under the plain meaning rule, there was a coup.”

The U.S. has already provided its annual contribution for this year, with the next payment not due until May.