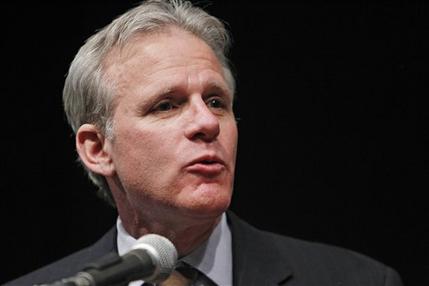 Israel’s envoy to the US stepping down

WASHINGTON (AP) — Michael Oren, Israel’s ambassador to the U.S., is stepping down after more than four years on the job, Israel’s Embassy in Washington announced Friday.

Oren, 58, said he’ll finish his term this fall. He said he’d continuing serving the people of Israel but didn’t specify in what capacity.

“Israel and the United States have always enjoyed a special relationship and, throughout these years of challenge, I was privileged to take part in forging even firmer bonds,” Oren said in a statement.

An American-born academic who taught at several universities, Oren moved to Israel in 1979 and enlisted in the paratroopers brigade. Before being tapped in 2009 by Prime Minister Benjamin Netanyahu and then-Foreign Minister Avigdor Lieberman to be Israel’s envoy to the U.S., Oren had volunteered as a military liaison officer, briefing reporters during Israel’s offensive that year against Palestinian militants in the Gaza Strip.

A frequent face on Sunday morning news shows and at Washington-area synagogues, Oren may have had a diminished role as a direct messenger between the two countries due to the perception that he was outside of Netanyahu’s inner circle, said Aaron David Miller, the Woodrow Wilson Center scholar who was a Mideast negotiator under six U.S. secretaries of state.

“Oren was last in a series of Israel-U.S. ambassadors that neither the president nor the secretary of state nor the prime minister really utilized,” Miller said. “They all had their own channels.”

Secretary of State John Kerry, who has spent much of his first months in office attempting to revive Israeli-Palestinian peace talks, called Oren “unfailingly candid” and a passionate advocate for Israel.

“He’s certainly been a terrific partner in our efforts to help the parties find a way back to the table,” Kerry said Friday in a statement.

The Israeli Embassy in Washington would not comment Friday on who the next ambassador will be or when a replacement will be named.

But the likely favorite to replace Oren is longtime Netanyahu adviser Ron Dermer, an American-born Israeli and former Republican activist, according to Israeli media and several individuals in the U.S. closely following the U.S-Israel relationship. The individuals were not authorized to discuss Dermer’s plans publicly and spoke on condition of anonymity.

If selected, Dermer could irk the left-leaning wing of the American Jewish community due to his close ties to the hawkish Netanyahu. On the other hand, those ties could make him a more effective envoy if he’s perceived by American officials as speaking credibly and with authority on behalf of Netanyahu’s government.