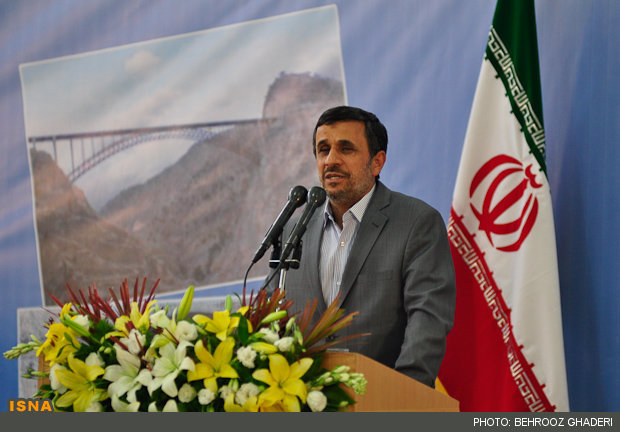 TEHRAN (FNA)- Iranian President Mahmoud Ahmadinejad said the country’s oil industry is in the course of achieving comprehensive self-sufficiency, adding that the industry not only has been able to meet the country’s gasoline needs at home but now exports the strategic product to foreign countries.

Addressing the inaugural ceremony of an upgrading plan at Lavan oil refinery, Ahmadinejad said the oil industry has witnessed taking big steps forward and has been able to indigenize designing, implementation and construction of oil refineries by reliance on domestic workforce.

“By reliance on its experts’ knowhow Iran’s oil industry can be changed into a large exporter of technical and engineering services in the future,” he added.

“Whereas Iran’s oil industry was completely dependent in the past, today all its sectors including engineering studies, exploration, development and production have achieved self sufficiency,” the president said.

“In the past foreigners asked us too many political and economic concessions by putting political pressures on the country but these days Iran’s oil industry is moving towards comprehensive development, progress and self-reliance.”

Elsewhere in his remarks, the president said without implementation of development plans and curbing past gasoline consumption pattern, today the country had no choice but to import 30 billion dollars of gasoline each year, but “we announced we ourselves are able to build oil refineries and did it, so that our country no longer needs to import any kind of oil products to meet its fuel needs”.

“Self esteem and self confidence are the most important achievements of the country’s oil industry which is difficult to set a price for it,” Ahmainejad noted.

He went on to say that the country will become an industrial and knowhow pole in the world and thanked the efforts made during his eight year presidency by the big family of oil industry stating Iranian peoples are talented, cultural and flag bearer of thinking globally.