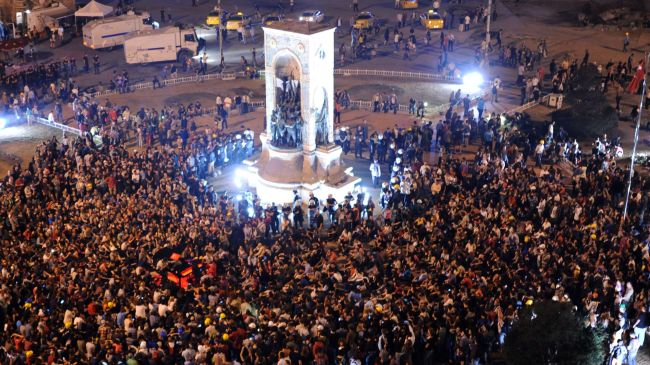 Demonstrators gathered at Taksim Square in protest against the government of Prime Minister Recep Tayyip Erdogan on June 13, 2013.

A Turkish court has blocked a redevelopment project for Istanbul’s Taksim Square after the country was rocked by four weeks of anti-government protests.

The court ruling is seen as a big blow to Prime Minister Recep Tayyip Erdogan, who had strongly backed the project, but is also seen as a victory for the opposition that has been staging nationwide rallies against it.

Istanbul has been the epicenter of anti-government demonstrations since May 31, when the police broke up a sit-in staged at Taksim Square to protest against the redevelopment plan which involved the demolition of Gezi Park.

The Turkish protesters said Gezi Park, which is a traditional gathering point for rallies and demonstrations as well as a popular tourist destination, is one of Istanbul’s last public green spaces.

The protests soon spread to other cities across the country and turned into calls for the resignation of the Turkish prime minister.

Several people have been killed in the violent crackdown on peaceful protesters, who Erdogan has described as foreign-backed extremists and terrorists.

The Turkish prime minister has faced international condemnation for his handling of the crisis. Turkish police have been also strongly criticized for using excessive force against the peaceful protests.