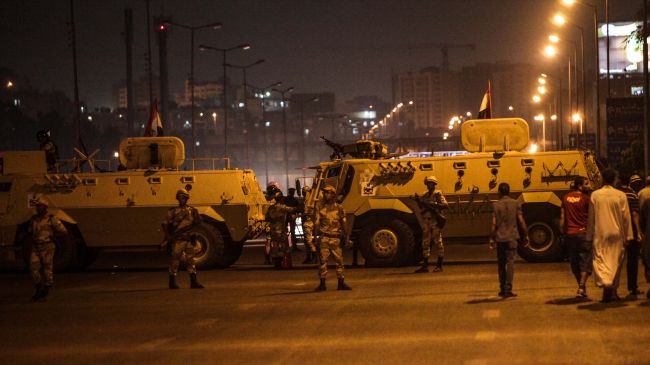 “He (Morsi) is being held preventively for final preparations,” said the army official, whose name was not mentioned in the reports, on Thursday.

Morsi might face formal charges over accusations made by his opponents, the official stated.

Senior Muslim Brotherhood official Gehad El-Haddad said earlier on Thursday, “Morsi has been separated from his aides and was taken to the Defense Ministry.”

Late Wednesday, General Abdel Fattah al-Sisi, the head of Egypt’s army, announced that Morsi was no longer in office during a speech on state television.

Morsi had said on his Facebook page that the army’s move was a “military coup,” asking the Egyptians to “abide by the constitution and the law and not to respond to this coup.”

State media also reported that arrest warrants had been issued for a total of 300 Brotherhood officials.

Egyptian army troops have been deployed throughout the country amid clashes between the supporters and opponents of Morsi.

According to Egyptian security officials, at least seven people have died in clashes between security forces and Morsi’s supporters in the city of Alexandria and the eastern city of Marsa Matrouh.

“Consultations will start from now, for a government and reconciliation,” said the former Arab League chief. “This is the end of Morsi’s regime. It’s over.”

In reaction to the events in Egypt, US President Barack Obama expressed deep concern over the Egyptian army’s removal of Morsi and urged a quick return to a civilian government.

“I now call on the Egyptian military to move quickly and responsibly to return full authority back to a democratically elected civilian government as soon as possible,” Obama said in a statement.

The statement also said that Obama had ordered a review of the implications for the USD 1.3-billion annual US military aid to Egypt as well as millions more in economic assistance in the wake of the removal of Morsi.

“I am following closely developments in Egypt and am fully aware of the deep divisions in society, popular demands for political change and efforts at brokering a compromise,” Ashton said in a statement.

“I urge all sides to rapidly return to the democratic process, including the holding of free and fair presidential and parliamentary elections and the approval of a constitution,” she added.

Saudi King Abdullah, however, congratulated Adli Mansour, saying his appointment comes at a “critical” time in the history of Egypt.

“On behalf of the people of Saudi Arabia, I congratulate you for taking over the leadership of Egypt at this critical time in its history,” Abdullah said in an astonishingly quick message of congratulation to Mansour.