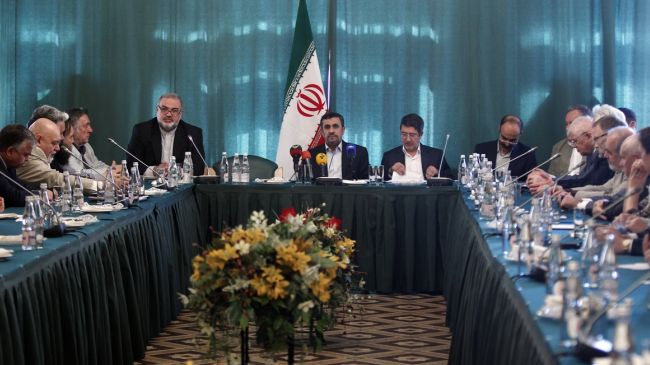 Iran nuclear issue will be resolve through interaction: Ahmadinejad

Iran President Mahmoud Ahmadinejad has expressed optimism that the Islamic Republic’s nuclear issue will be resolved through interaction.

“With regard to [Iran’s] nuclear issue, the best case scenario is that we shift from the position of dispute to interaction and cooperation and this will happen,” Ahmadinejad told a group of Russian scholars in Moscow on Tuesday.

He noted that the world has to recognize a “nuclear Iran” whose atomic program is “entirely peaceful.”

“We do not trust the Western governments, neither do they trust us; each having our own reasons,” Ahmadinejad said, adding, “However, solutions must be found for it through dialogue and talks,” he was quoted by IRNA as saying.

Ahmadinejad stated that many opportunities have been lost for the resolution of Iran’s nuclear issue in the past.

Iran and the P5+1 group of world powers — Russia, China, France, Britain, and the United States plus Germany — have held several rounds of talks, mainly over the Iranian nuclear energy program.

The US, Israel, and some of their allies have repeatedly accused Iran of pursuing non-civilian objectives in its nuclear energy program and used the allegation as a pretext to impose illegal sanctions against the Iranian nation.

Tehran has categorically rejected the accusation, arguing that as a signatory to the Non-Proliferation Treaty and a member of the International Atomic Energy Agency (IAEA) it is entitled to develop nuclear technology for peaceful purposes.

Meanwhile, numerous inspections of Iran’s nuclear facilities by the IAEA have never found any evidence showing that the Iranian nuclear energy program has been diverted toward non-civilian purposes.