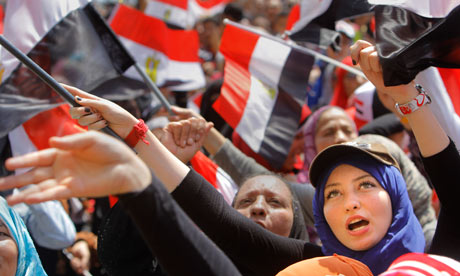 A new wave of sexual assaults by groups of men targeting women has been reported during anti-government protests in Cairo’s Tahrir Square.

A group formed to protect women in the square, which has become the epicentre of anti-government rallies, said it recorded the highest number of attempts on Sunday – 46.

The previously friendly atmosphere became more aggressive as night fell on the badly lit plaza, which has seen a rise in attacks against women since shortly after the 18-day revolution that forced the resignation of Morsi’s predecessor, Hosni Mubarak, in 2011. Sexual harassment has long been common in Egypt, but its increasing frequency and violence has shaken the protest movement.

A Dutch woman was assaulted by numerous men as a crowd surrounded her in the square on Friday, officials said. On Monday the Committee to Protect Journalists said the 22-year-old woman had been repatriated, referring to a statement issued by the Dutch embassy in Cairo.

A security official, speaking on condition of anonymity because he wasn’t authorised to talk to the media, said the Egyptian prosecutor’s office had launched an investigation into the attack.

Dutch media reported that the foreign ministry had confirmed the assault without giving more details. The reports said she was believed to be an intern with an Egyptian organisation and had gone to the square to take photos of the demonstrations.

Top presidential aide Essam el-Haddad said the attack was among seven cases reported by human rights groups in or around Tahrir on Friday.

“Those criminal acts do not appear to be politically motivated or controlled,” he said in a statement posted on his office’s Facebook page. The president’s office said the attacks “appear to be a sign the crowds in Tahrir are out of control”.

Some protesters say the government has exaggerated claims of sexual assault to try to drive away female protesters and damage the opposition’s reputation.

Operation Anti-Sexual Harassment/Assault, which patrols the square, said 46 group assaults were recorded on Sunday in Tahrir.

“Many cases were severe cases that required either psychological or medical treatment,” one member of the group, Engy Ghozlan, told the Associated Press.

The group said on its Twitter account that at least 17 attempted assaults were reported in Tahrir on Monday, and volunteers had intervened in eight of them.

An AP reporter witnessed a group of men waving wooden sticks surrounding an Egyptian woman on Sunday. She shouted at them before falling on the ground. Many of the men claimed they were trying to help the woman but would not allow anyone to approach her. The reporter was unable to reach the woman to help her.

Nabil Mitry, a 35-year-old protester who also saw the attack, said the assailants were yelling insults at a man trying to help the woman. He blamed the lack of police at the square. Security forces largely stay away to avoid provoking confrontations with the protesters.

“The problem is that there is no police, so there is no security. If the police was securing the square we wouldn’t have this kind of problem”, he said.

A spokesman for Morsi’s Muslim Brotherhood, Gehad al-Haddad, urged protesters and others to support initiatives such as Operation Anti-Sexual Harassment/Assault “to prevent anything from happening to citizens joining their demonstrations” in a statement on Twitter.

The group dismissed the statements on Monday.

“We don’t believe in the presidency and the Muslim Brotherhood’s sudden concern about the women’s physical integrity or their full right to protest safely, when we all know their position regarding women’s equality and rights,” it said.

Initiatives to counter the problem have mushroomed in recent months, with groups protecting women at large protests or during national holidays when groping and harassment in crowds is at its peak. Social network sites have been started where women can “name and shame” their harassers.

But some conservative religious clerics and government officials blame women, saying they invite harassment and sexual abuse by mixing with men.

In one of the most high-profile cases, Lara Logan, a correspondent for the US network CBS, was sexually assaulted and beaten in Tahrir Square at the height of the anti-Mubarak uprising. Logan was treated in hospital for four days after returning to the US.