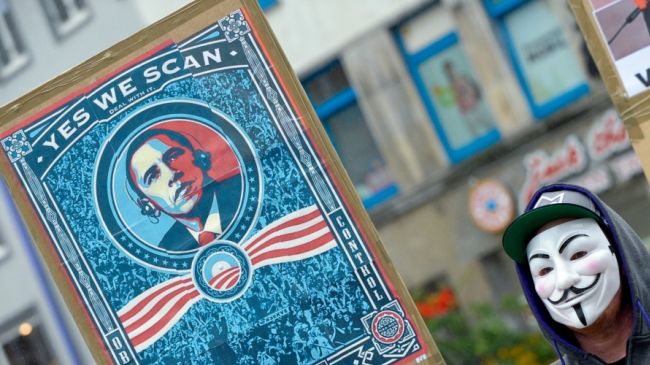 A protester holds a poster during a demonstration against the US National Security Agency in Hanover, Germany, June 29, 2013.

The office of Germany’s Federal Prosecutor has said it is preparing to bring charges against the US National Security Agency (NSA) over recent espionage allegations.

A spokeswoman for the office said Sunday that it is investigating whether the NSA violated laws aimed at protecting German citizens.

She continued by saying that “criminal complaints” relating to the NSA spying scandal appear “likely.”

A similar investigation is also underway into allegations that the UK intelligence was involved in espionage activities against German citizens.

In the city of Giessen, a prerequisite has reportedly been used at the local public prosecutor’s office to lodge a criminal complaint against an unknown perpetrator over the spying.

This comes as new spying claims were made on June 29, after revealed documents obtained by American whistleblower Edward Snowden showed that NSA ran a major and continuous spying operation in Germany.

German newspaper Der Spiegel said the NSA regarded Germany as a country open for “spy attacks” and that its phone and internet surveillance operation in Germany was the largest in the European Union.

After the revelation, German Justice Minister Sabine Leutheusser-Schnarrenberger demanded an immediate explanation and described the operation as “reminiscent of the actions against enemies during the Cold War.”

This latest disclosure came a week after other reports showed extensive tapping of German phone and internet traffic by the British intelligence under its so-called Tempora program. The collected information was reportedly shared with the NSA.

As a response, the UK government has invited German officials to participate in a video conference on July 1 in the UK embassy in Berlin, in which the issue of spying is to be addressed.

Reports say the German government will be represented by senior officials from the Interior Ministry, the Justice Ministry, the Foreign Ministry and Germany’s foreign intelligence agency, the BND.