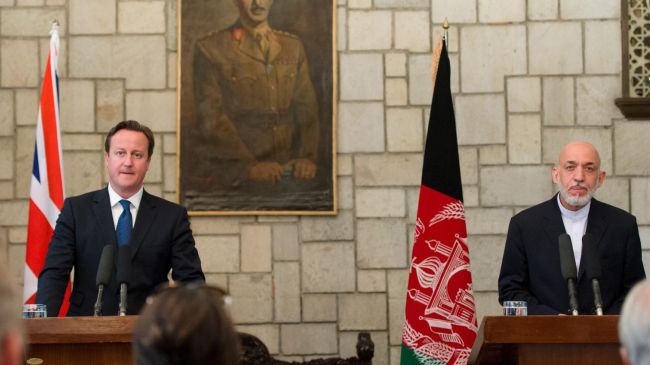 British Prime Minister David Cameron says talks with the Taliban are the only way forward to end the almost 12-year conflict in Afghanistan.

Cameron, said in a joint press conference with Afghan President Hamid Karzai in Kabul on Saturday, that London is interested in holding peace talks with the Taliban.

He added the Afghan government is also ready for the negotiations stressing a peace process involving the insurgents should have been set in motion earlier.

His remarks came as Britain’s senior military officer in Afghanistan General Nick Carter said on Saturday that the western front had an opportunity to talk to the Taliban 10 years ago but they went for the wrong choice of continuing to fight the insurgents.

Cameron also urged the Taliban to endorse a “political process” and lay down arms.

His stance is in diametrical opposition to what London has been pursuing in Afghanistan up to now.

His predecessor Gordon Brown said back in 2007 that Britain “will not enter into any negotiations with these people [the Taliban]”.

Since the US-led invasion of Afghanistan in 2001, 444 British forces have been killed in the country.

Britain has pledged to withdraw its forces from Afghanistan by 2014 after years of bloody clashes with the insurgents and imposing numerous civilian deaths and massive displacement imposed on the Afghan population without ever achieving the originally-stated aim of bringing stability to the country using military muscle.