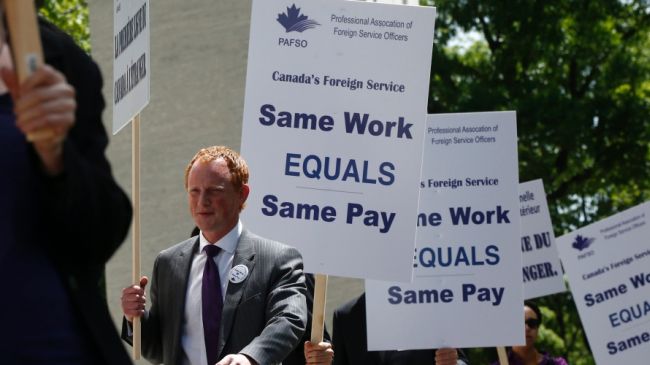 An ongoing strike by Canada’s Professional Association of Foreign Service Officers has created a lengthy visa backlog, which has imposed a financial burden on the Canadian tourism and education industries.

The strike has continued since April in protest against unequal income compared to other Canadian federal government professionals performing the same job inside Canada.

Tim Edwards of the Professional Association of Foreign Service Officers (PAFSO) said the officers receive between 3,000 and 14,000 Canadian dollars less in annual income.

The union has shut down some services at Canadian Foreign Affairs headquarters in Ottawa, and at about a dozen missions abroad, including services in London, Beijing and Delhi.

PAFSO has promised to increase its pressure against the administration of Prime Minister Stephen Harper.

“We are now incredibly frustrated and angry that the government has not made a reasonable attempt at seeking a compromised solution here,” Edwards said.

Paul Dewar, foreign affairs critic for the New Democratic Party, said the lengthy strike is an embarrassment for the Conservative Party.

“People are scratching their heads and wondering, ‘What’s with Canada? They can’t even get along with their own diplomats,” said Dewar.

Experts warn that the ongoing strike is causing negative effects on Canada’s tourism and educational sectors.

David Goldstein, the president of the Tourism Industry Association of Canada, said the visa delay could inflict damage worth CAD 280 million to the Canadian tourism business this summer.

Christine Tausig Ford, senior vice-president of the Association of University and Colleges of Canada, said there are already students who have withdrawn from courses since they did not receive their visas on time.

“The impact will become more severe in coming weeks. We understand there’s a backlog in key markets and that’s growing by 1,000 visa applications a week,” said Ford.

If the dispute is to continue until fall, diplomats will not be the only ones striking as thousands of prison guards, border guards, pilots and rail, marine and aviation inspectors, represented by five other unions, are planning similar labor actions.