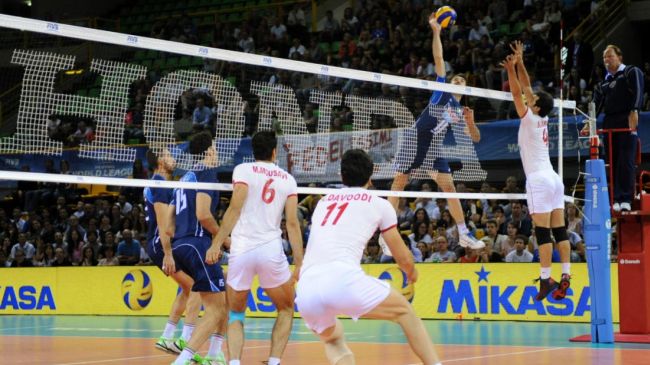 A view of the match between Iranian men’s volleyball team (in white) and Italy in Modena, Italy, on June 28, 2013

The Iranian squad continued to exert a good spell of pressure on the hosts, claiming the second set 25-22.

The Iranian volleyball players were very close to winning the third set, but they lost it to their rivals 22-25.

But Iran came back from behind to win the fourth set 32-30.

“My guys fought throughout the match, from the first point to the last, without losing spirit even when [Ivan] Zaytsev kept on scoring points,” said Iran’s coach Julio Velasco. “We were good at seizing the opportunity and that’s precisely what I always ask my team: Never give up!”

“Matches such as this need to be regarded as lessons for us,” Italy’s coach Mauro Berruto said. “Iran played well and won because they were more confident than us.”

“We played well but not as good as them,” Italy’s captain Cristian Savani said. “They played a fantastic match. We knew it would be difficult, and actually, they proved their high value. We did not underestimate them, but they started off great at the beginning of every set.”

On June 23, Iranian volleyball players gained their first victory in the 2013 FIVB World League against Serbia.