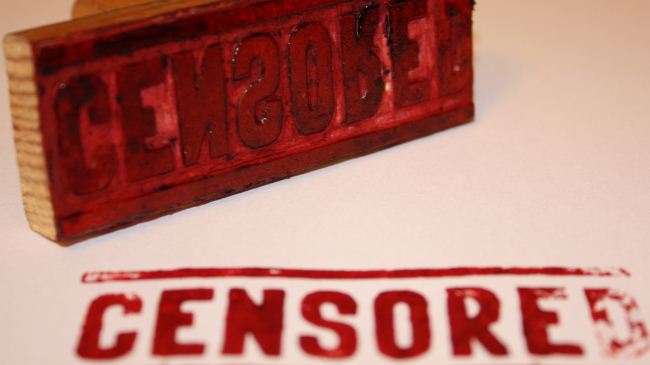 The idea of removing Press TV from Intelsat in the USA was initially brought up in an article titled “Why Doesn’t Obama Ban Iranian Press TV?” in January 2012 by Kenneth R. Timmerman.

On June 19, Intelsat said it will no longer provide services to Iranian channels, including English-language news channel Press TV. The decision has been made under the pretext that the company should be abiding by the sanctions against the head of the Islamic Republic of Iran Broadcasting (IRIB), Ezzatollah Zarghami.

In this article, Timmerman weaves an intricate conspiracy and through an argumentation which reeks of but an ill-trained mind, he jumps to the conclusion that Press TV is working freely in the United States and that the US Treasury Department’s Office of Foreign Assets Control (OFAC) should take due measures to shut down all the offices of Press TV in the United States. In his naïvely moronic tone, he admonishes that “the Obama Administration permits the channel to operate on American soil without a license and in violation of U.S. sanctions regulations, which ban commercial transactions with Iran. It appears to be another example of Obama coddling the terrorist regime.”

A point which needs to be clarified here is that Mr. Timmerman is officially ignorant of the fact that the illegal US sanctions against the Islamic Republic barely at all include a ban on media unless we assume that freedom of speech is a weapon in the hands of the westerners who keep pontificating about freedom of speech.

Timmerman’s argumentation heavily focuses on the decision of Ofcom, British Office of Communication which removed Press TV from the BSkyB platform under the pretext that the channel had conducted an interview in 2009 with a Newsweek correspondent held in an Iranian jail. According to British telecom regulator, the interview by Press TV with Maziar Bahari who was jailed by the Iran over his reporting of the presidential elections in June 2009, was carried out under duress.

What seems to be a fair judgment in this regard is that Press TV has proved very bold and resolute in broadcasting the truth and delivering the undelivered reports. Media experts maintain that Washington has long sought to block the access of information particularly when and if it comes from Iran.

In a Friday interview with Press TV, Ralph Schoenman aptly said, “The removal of Iranian channels from the air in July 1 is directly linked to the NSA (US National Security Agency) spying, and not merely spying, but the NSA destruction of the access to communications across the world.”

Apart from the fact that this act of aggression against Iranian media runs counter to the very principles the US government claims to champion, a considerable degree of practical speculation strongly suggests that there is a large-scale plot meticulously authored and heavily funded by rogue elements within the US government.

Kenneth R. Timmerman who initiated the entire idea in his article is executive director of an anti-Iran institute sonorously dubbed as “the Foundation for Democracy in Iran”. The organization was founded in 1995 in collaboration with Peter Rodman, Joshua Muravchick (an Iran-hater who called for the bombing of the Islamic Republic in 2006 in a Los Angeles Times op-ed entitled “Bomb Iran”) and the terrorist MKO members with the express intention of toppling the Iranian government.

The so-called “Foundation for Democracy in Iran” is chiefly comprised of current or former CIA assets including former CIA Director Wollsey and former Defense intelligence operative Frank Gaffney and others are openly affiliated with the Mossad intelligence agency including Menashe Amir.

Spreading lies about Iran, the undercover organization gained some attention when it filed a lawsuit against Iran with the Southern District of New York for Manhattan alleging that Iran was behind the 9-11 terrorist attacks.

Under the auspices of CIA and Mossad, the organization has managed to dupe OFAC into embarking on a most self-mortifying venture i.e. the blocking of the Iranian channels, thereby barricading access to free and public flow of information.

The whole scenario, which has taken a lot of energy and finance, evinces a media phobia, a fear of truth and a preposterous claim to democracy in the West.

Besides, this nefarious marriage of intelligence agencies such as CIA and Mossad and the role they play in garroting a dissident truthful voice testify to the sway of Iranian media and a powerful public penchant for hearing the other story, which often remains untold, unseen or undervalued in Western media.