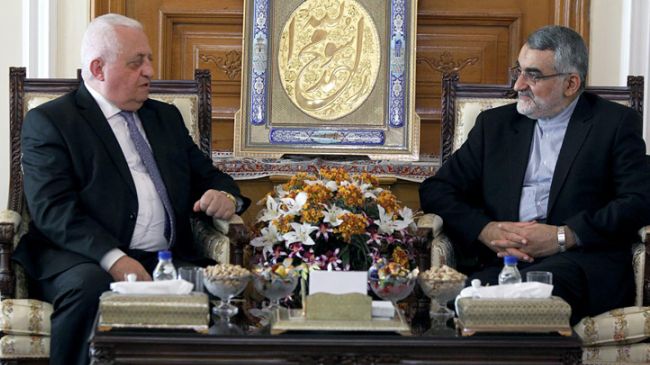 Armenian Ambassador to Tehran Grigor Arakelian says his country’s government and parliament are determined to expand the friendly ties with the Islamic Republic of Iran.

In a meeting with Chairman of the National Security and Foreign Policy Committee of Iran’s Majlis Alaeddin Boroujerdi on Wednesday, Arakelian also called on both countries to tap into their potentialities to enhance ties in various sectors.

Hassan Rouhani secured an outright victory in Iran’s 11th presidential election by garnering more than half of the 36.7 million ballots cast.

Nearly 50.5 million Iranians were eligible to participate in the presidential election. The voter turnout in the election was 72.7 percent, according to the Interior Ministry.

The Iranian lawmaker, for his part, said the friendly historical bonds between the two nations can lay the groundwork for closer cooperation, calling for the development of the friendly ties on all fronts.

Underlining the significance of economic and trade transactions between the two countries, Boroujerdi said Iran and Armenia need to use their potential to shore up economic, trade, industrial and commercial cooperation.

He also highlighted the role of parliamentary cooperation in exploring areas for closer economic ties.