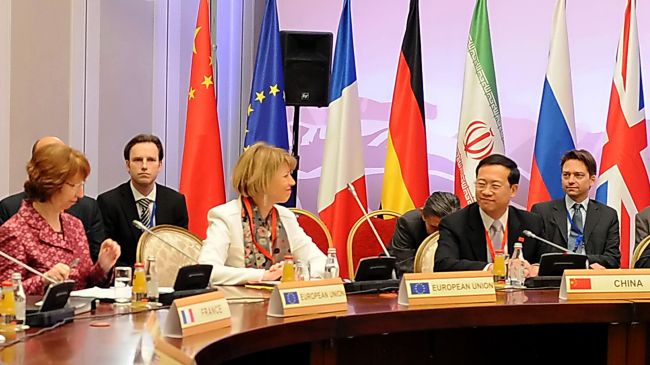 Iran’s president-elect Hassan Rouhani has formed a group to assess the future rounds of comprehensive negotiations between Iran and the P5+1 group of world powers, the Iranian foreign minister says.

“Mr. Rouhani has appointed a group to examine the continuation of talks with the P5+1 (permanent members of the UN Security Council plus Germany) and our friends in the Foreign Ministry are cooperating with him,” said Ali Akbar Salehi in a joint press conference with his visiting Tajik counterpart, Hamrokhon Zarifi, in Tehran on Wednesday.

“When Mr. Rouhani takes office, the time and venue for the next round of talks will be determined,” he added.

Rouhani emerged victorious in Iran’s 11th presidential election in June 14, which was marked by a high voter turnout, winning 50.7 percent of a total of over 36 million ballots counted. The voter turnout in the election was 72.7 percent, according to Iran’s Interior Ministry.

Rouhani was Iran’s chief nuclear negotiator from October 2003 to August 2005.

Salehi noted that since the Iranian administration is in the transition process, it is not easy to hold talks with the P5+1 at present time, and the concerned parties should wait for at least two to three weeks.

Iran and the P5+1 have held several rounds of talks on a range of issues with the main focus being on Iran’s nuclear energy program.

The two sides wrapped up their latest round of negotiations on April 6 in the Kazakh city of Almaty. An earlier meeting had been held in Almaty on February 26-27.

The US, Israel and some of their allies falsely claim that Iran is pursuing non-civilian objectives in its nuclear energy program, with Washington and the European Union using the unfounded claim as a pretext to impose illegal sanctions on Iran.

Tehran strongly rejects the allegation over its nuclear energy activities, maintaining that as a committed signatory to the Non-Proliferation Treaty and a member of the International Atomic Energy Agency, it has the right to use nuclear technology for peaceful purposes.