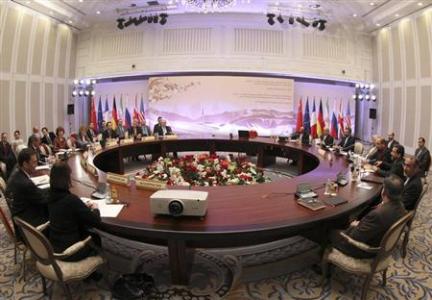 Kazakhstan may host next round of Iran N-talks

Almaty: The next round of talks between Tehran and five permanent members of the UN Security Council plus Germany, namely the P5+1 group, on Iran’s nuclear programme may be held in Kazakhstan, the Iranian envoy to Kazakhstan said.

“We consider that there is no need for all important international actions to take place in European countries, such as Geneva, Vienna, Paris when countries in the region, including Kazakhstan, have all the potential for holding similar actions,” Xinhua quoted Iranian Ambassador Gorban Seyfi as saying.

H said the two previous rounds of talks had been successfully held in Almaty.

“At the end of the second round, Mr. Saeed Jalili, chairman of the national council of safety and Iran’s chief negotiator, declared that Iran is not against holding the third round of talks in Kazakhstan. We will wait for the decision of the main negotiators of P5+1 group,” Seyfi said.

On April 6, Iran and the P5+1 group held talks in Almaty, which achieved no practical results.