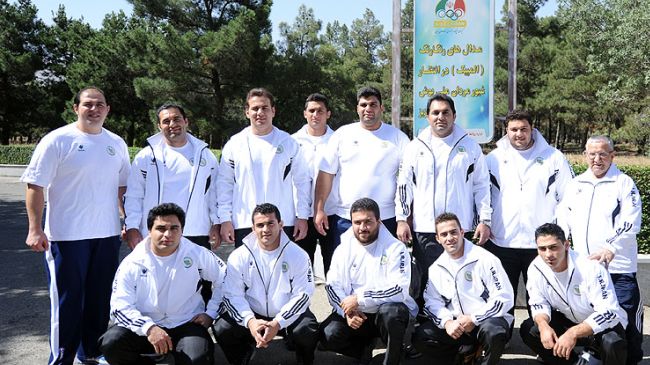 Iran’s national weightlifting team has collected 564 points in the 2013 Asian Weightlifting Championships in Astana, Kazakhstan, to clinch the victory of the prestigious sports event.

On Monday, Yasin Bagheri of Iran claimed a bronze medal for a total of 374 kilograms in the men’s 94-kilogram weight category.

Alexandr Zaichikov from Kazakhstan snatched the gold for a total lift of 385 kilograms. Zhang Shengguo of China took the silver with a total of 374 kilograms.

Moradi seized the gold in the men’s 85-kilogram category on Sunday. He lifted 158 kilograms in the snatch, 200 kilograms in clean and jerk and won the gold with a total lift of 358 kilograms.

Taghian received a gold medal in the men’s 77-kilogram weight category on Saturday night. The Iranian athlete lifted 163 kilograms in snatch and 203 kilograms in clean and jerk for a total lift of 366 kilograms.

Chinese Zhong Guoshun snatched the silver medal with 356 kilograms, and Kim Kwang-Song from North Korea won the bronze medal with a total lift of 355 kilogram.

Ketut Ariana from Indonesia finished in second place with a total lift of 310 kilograms, and bronze medal went to Pan Chien-hung of Chinese Taipei with 303 kilograms.

The 2013 Asian Weightlifting Championships, the 44th men’s and 25th women’s championships, started on June 21 in the Kazakh capital, and will wind up on June 26.

A total of 140 weightlifters from 19 countries took part in the championships.