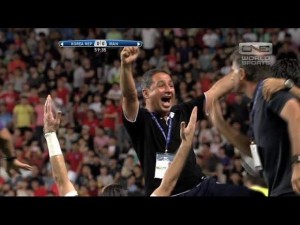 In much of the world, soccer is one of the few events that stirs more emotions than a national election. Over a recent four-day period, Iran embraced the euphoria of both.

On June 14, Iranians poured into polling places to elect Hassan Rouhani — an outcome that suggested a shift toward political moderation and repaired relations with the West.

A few days later, some 4,000 miles away, the Iranian soccer team did its part for national pride by defeating South Korea to secure passage to the the 2014 World Cup in Brazil — its third berth in the past five attempts.

Barely able to catch its breath, Tehran transformed political gatherings into soccer raves. In the case of the latter, the joy was unanimous.

When the players returned home on a charter flight, 40,000 supporters awaited at the national stadium for a welcoming party that included speeches, introductions and victory laps with waving flags.

Among those in the delegation: Iranian-American assistant coach Omid Namazi.

“The people continued the celebrations night after night after night,” said Namazi, a member of Carlos Queiroz‘s staff for more than two years. “Qualifying for the World Cup is a big deal. And with the election, there is a lot of hope — a feeling things will get better, especially economically. It’s a good feeling in Iran right now.”

Namazi, 47, was born in Utah while his father was a student at Brigham Young University. After spending much of his youth in Iran, Omid moved with his family to Alexandria, Va. While his father pursued a doctorate at the University of Maryland, Omid starred at West Virginia University. He then embarked on a playing and coaching career that spanned 22 years and approximately 18 U.S. cities, beginning in 1988 with the Washington Diplomats in the semipro American Soccer League. He also played locally for the Maryland Bays (outdoor) and Baltimore Spirit (indoor).

Namazi returned to Iran in 2010 to serve as an assistant for one season with a small pro team, Steel Azin. He was planning to come back to the United States when Queiroz, a renowned Portuguese coach hired by the Iranian federation in April 2011, offered him a job. Namazi had played briefly for Queiroz when both were employed by the New York/New Jersey MetroStars in MLS’s 1996 inaugural season. Namazi knew the local scene and spoke the language.

Iran’s other coaches have American ties, as well: Portugal’s Antonio Simoes played in U.S. leagues and Dan Gaspar is a Connecticut native and goalkeeping specialist.

The mission: qualify for the World Cup.

Iran breezed past the Maldives in the second round and finished atop its semifinal group to advance to the 10-nation Asian finals. Two teams from each of the two groups would earn automatic berths. South Korea and Iran were heavily favored in Group A, but Uzbekistan proved to be a nuisance until the very end.

Entering the last set of matches, the Iranians sat second, one point behind Korea and two ahead of Uzbekistan. Finishing third would send them to a regional playoff and, if they were successful, an unenviable series against a South American side.

In Ulsan, however, Dutch-Iranian forward Reza Ghoochannejad scored in the 60th minute for a 1-0 upset. Iran finished with a 5-2-1 record and 16 points — two ahead of both South Korea and Uzbekistan. The Koreans won the tiebreaker on goal difference and also clinched a World Cup berth, their eighth straight. Uzbekistan will play Jordan in a playoff this fall.

The swirl of political activity back home was not forgotten. While the team was in South Korea, the Iranian Embassy provided a make-shift polling place in a meeting room at the team hotel. Most of the delegation cast ballots.

With a World Cup place assured, Namazi and the coaching staff will turn its attention to Asian Cup qualifiers in Thailand and Lebanon and friendlies ahead of the Brazilian adventure next summer. (Iran was eliminated in the first round in each of its previous three World Cup appearances — 1978, 1998, 2006). Indentifying and introducing fresh talent to a veteran roster is a priority, Namazi said.

For now, though, Namazi is in New Jersey visiting his two children, who live with his ex-wife near Philadelphia. Vacation involved a trip to Ocean City (N.J.). He will return to Tehran, where he lives with his retired parents, sometime after July 4. His contract expired after the qualifying stage and he is in the process of negotiating a new deal through the World Cup.