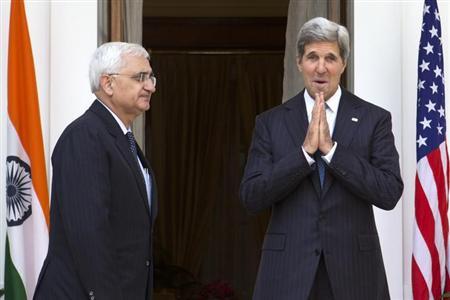 (Reuters) – The United States sees India’s reductions in imports of oil from Iran as an “important step” in bringing pressure on Tehran over its nuclear programme, Secretary of State John Kerry said.

“We are appreciative that India has worked hard to reduce its dependency on Iranian oil and that has been an important step,” Kerry said at a press conference with Indian Foreign Minister Salman Khurshid in New Delhi.

He said he hoped New Delhi would urge the Iranians “not to miscalculate about American and international commitment” to stopping Iran from pursuing nuclear weapons. Tehran maintains its nuclear programme is for peaceful purposes.

Washington renewed six-month waivers on its Iran sanctions for India, China and seven other economies earlier this month in exchange for their agreeing to reduce purchases of oil from Tehran.

Indian refiners had cut dependency on Iranian crude to about 5.5 percent of total imports in January to May from over 10 percent in the same period a year ago.