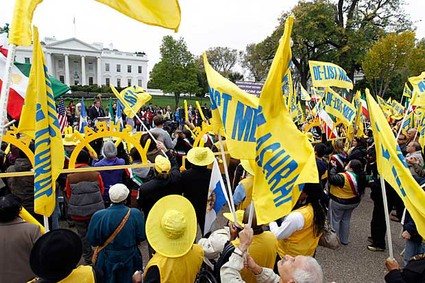 “Ikhwan al-Muslimun condemns the grouplet’s (the MKO) acts against the innocent citizens,” Abdoh Mostafa Dasouqi, a senior member of the Muslim Brotherhood, said in an interview with Habilian Association on Sunday.

“Ikhwan al-Muslimun doesn’t support those who use weapons against the innocent people and therefore the activities of the MKO are not acceptable to us,” he added.

Dasouqi expressed regret that some violence-seeking groups across the globe use illegitimate tools to attain their goals, and said, “The MKO is no exception to this rule.”

Since the 2003 US invasion of Iraq, the group, which now adheres to a pro-free-market philosophy, has been strongly backed by neo-conservatives in the United States, who eventually took the MKO off the US terror list.

The US formally removed the MKO from its list of terror organizations in early September 2012, one week after Secretary of State Hillary Clinton sent the US Congress a classified communication about the move. The decision made by Clinton enabled the group to have its assets under US jurisdiction unfrozen and do business with American entities, the State Department said in a statement at the time.