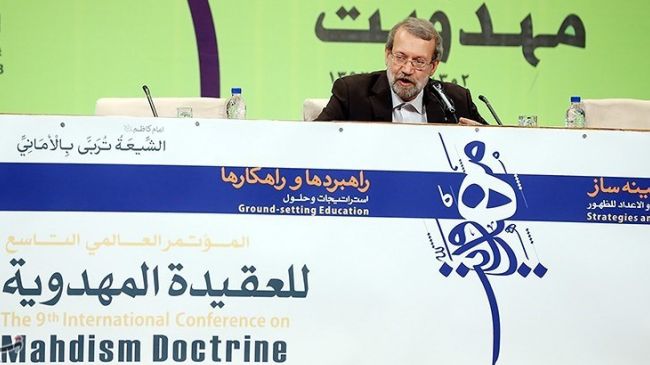 Iran Majlis Speaker Ali Larijani says a new Middle East is being formed as a result of the ongoing wave of Islamic Awakening.

“The new Middle East will be shaped through sacrificial struggles, not by relying on American weapons and Takfiri mercenaries who have discredited Islamic Jihad,” Larijani said during an international conference on Mahdism Doctrine on Sunday.

Larijani further described the existence of “extremist and mercenary terrorists” as the reason behind the “bankruptcy and misery” of Muslims.

The senior Iranian official also slammed the recent meeting of the so-called Friends of Syria group which was held in the Qatari capital on Saturday to discuss providing more weapons to extremist armed groups fighting against the Syrian government.

“Yesterday, they [Western countries and their regional allies] held a shameful meeting and decided to send different weapons to Syria for further massacre of Syrians, and it is interesting that these crimes are being perpetrated under the guise of fighting terrorism.”

At the end of the Doha meeting, foreign ministers of the anti-Damascus alliance agreed to “provide urgently all the necessary materiel and equipment” to the extremist armed groups within Syria.

Pointing to the recent opening of a political office by the Taliban militants in Doha, the Iranian Majlis Speaker said the US-led invasion of Afghanistan has been such a disgrace that Washington is planning to hold talks with the groups that it considers terrorist.

President Barack Obama’s administration has supported peace talks with the Taliban after US-led forces lost ground against militants in recent months across Afghanistan.

On Saturday, the US Special Representative on Afghanistan and Pakistan James Dobbins travelled to the Qatari capital to hold controversial peace talks with the Taliban militants.