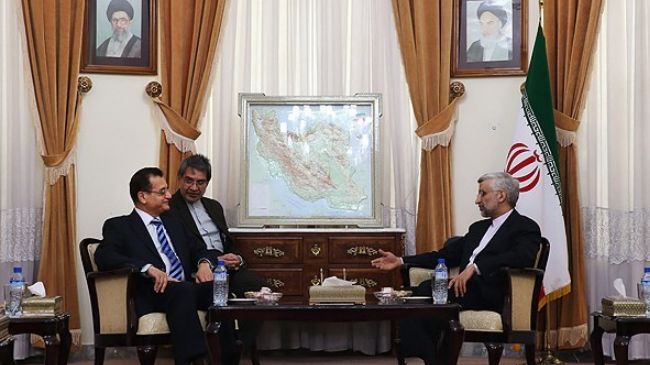 Secretary of Iran’s Supreme National Security Council (SNSC) Saeed Jalili says the decision by certain countries to arm militants fighting against the Syrian government is a threat to global security.

In a meeting with the visiting Lebanese Foreign Minister Adnan Mansour in Tehran on Sunday, Jalili said, “International community will certainly react to this issue, and those countries [sending arms to Syrian militants] will be disgraced.”

The SNSC secretary added that regional countries will not allow certain Western powers to use terrorism as a tool to target regional security.

The Lebanese minister, for his part, said arming al-Qaeda and al-Nusra Front terrorists in Syria is against claims by the West and its allies about supporting democracy in the Arab country.

Mansour added that regional security can only be established through peaceful means and honoring the people’s demands.

The top officials agreed to “provide urgently all the necessary materiel and equipment to the opposition on the ground, each country in its own way in order to enable them to counter brutal attacks by the regime and its allies and protect the Syrian people.”

Reports show the chaos is being orchestrated from outside the country and that a very large number of the militants are foreign nationals.