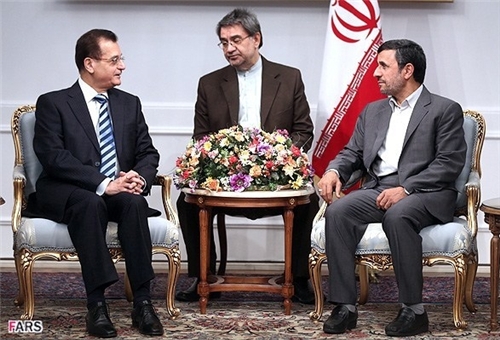 Ahmadinejad: Crisis in Syria part of enemies’ scenario for hegemony over region

TEHRAN (FNA)- Enemies plot to dominate the entire region through different scenarios like the crisis in Syria, Iranian President Mahmoud Ahmadinejad warned, underlining that the problems in Syria should merely be settled through negotiations and national unity.

“The enemies are seeking to dominate the whole region and the Syrian issue is just part of a bigger scenario, therefore, all people should be vigilant in order not to be fooled by the game of the enemy,” Ahmadinejad said in a meeting with the visiting Lebanese Foreign Minister, Adnan Mansour, in Tehran on Sunday.

He also referred to the situation in Syria, and stressed that national unity and understanding is the only way to improve the current conditions in the Muslim country.

“Violence doesn’t solve any problem and the two sides should negotiate and agree with each other and administer their country through sympathy and solidarity,” Ahmadinejad continued.

In October 2011, calm was eventually restored in the Arab state after President Assad started a reform initiative in the country, but Israel, the US and its Arab allies are seeking hard to bring the country into chaos through any possible means. Tel Aviv, Washington and some Arab capitals have been staging various plots in the hope of stirring unrests in Syria once again.

The US and its western and regional allies have long sought to topple Bashar al-Assad and his ruling system. Media reports said that the Syrian rebels and terrorist groups have received significantly more and better weapons in recent weeks, a crime paid for by the Persian Gulf Arab states and coordinated by the United States.

The US daily, Washington Post, reported in May 2012 that the Syrian rebels and terrorist groups battling the President Bashar al-Assad’s government have received significantly more and better weapons in recent weeks, a crime paid for by the Persian Gulf Arab states and coordinated by the United States.

Opposition activists who several months ago said the rebels were running out of ammunition said in May 2012 that the flow of weapons – most bought on the black market in neighboring countries or from elements of the Syrian military in the past – has significantly increased after a decision by Saudi Arabia, Qatar and other Persian Gulf states to provide millions of dollars in funding each month.