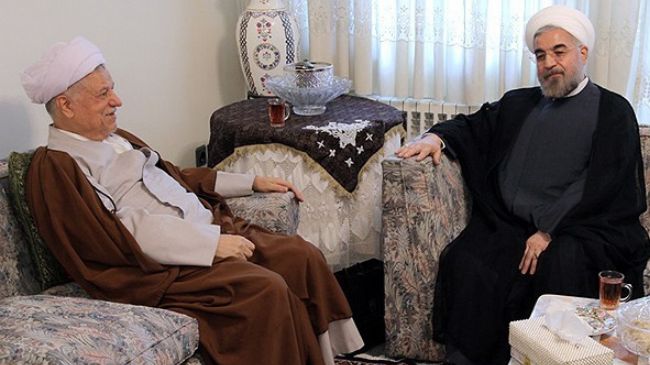 In a meeting with the president-elect on Saturday, Rafsanjani once again congratulated Rohani on his victory in Iran’s 11th presidential election, wishing him and his future administration great success.

He said Rohani’s discourse of moderation and his policy of prudence and wisdom mark the beginning of a new chapter in governing the country.

“The policy of moderation and wisdom and the use of collective wisdom, which is the slogan of Dr Rohani’s administration, can safeguard and strengthen the country’s national solidarity and comprehensive unity, and it can also help solve numerous domestic problems, in particular economic ones, and create constructive interaction with world countries on international issues,” Rafsanjani said.

The top Iranian official described the passion and hope which emerged in Iranian society following the June 14 political election as “a great and unique asset” for the future administration.

Rohani, for his part, praised Rafsanjani’s assistance and consultations and said, “the next administration is the result of the passion, hope and a political epic created by all walks of the Iranian society, in particular the young generation which has come to the scene to make a change in the country’s administrative trend and create new condition.”

He also expressed hope that he would be able to meet the people’s rightful demands.

Rohani secured an outright victory in Iran’s presidential election by garnering more than half of the 36.7 million ballots cast.

Nearly 50.5 million Iranians were eligible to participate in the presidential election. The voter turnout in the election was 72.7 percent, according to the Interior Ministry.