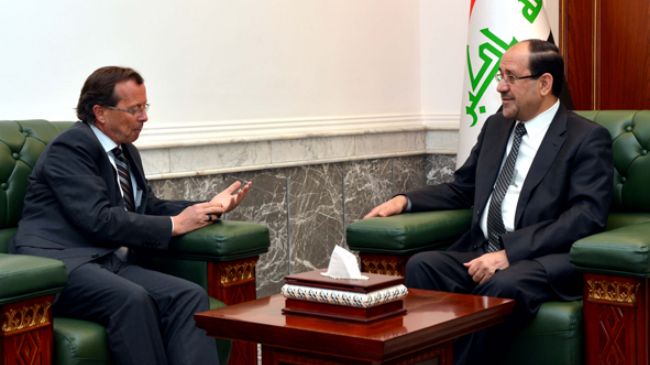 Iraqi Prime Minister Nouri al-Maliki made the call on Thursday during a meeting with the outgoing head of the UNAMI, Martin Kobler, at the premier’s office in Baghdad.

Maliki called on the UN mission to “focus on the problem of the MKO … to apply the agreement concluded in this regard,” the prime minister’s office said in a statement.

The MKO — listed as a terrorist organization by much of the international community — fled Iran in 1986 for Iraq, where it enjoyed the support of Iraq’s executed dictator Saddam Hussein, and set up its camp near the Iranian border.

The group is notorious for carrying out numerous acts of terror against Iranian civilians and officials, involvement in the bloody repression of the 1991 Shia Muslims in southern Iraq, and the massacre of Iraqi Kurds in the country’s north under Saddam.

In December 2011, the United Nations and Baghdad agreed to relocate some 3,000 MKO members from Camp New Iraq, formerly known as Camp Ashraf, in Diyala Province to Camp Liberty — a former US military base near Baghdad International Airport.