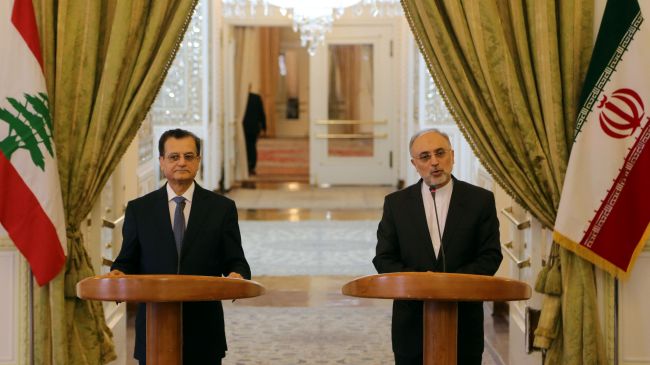 Iran and Lebanon have called for a stop to arms delivery to militants in Syria, saying it will not resolve the ongoing crisis but will only escalate violence in the Arab country.

Iran’s Foreign Minister Ali Akbar Salehi and his Lebanese counterpart Adnan Mansour voiced their opposition to arms funneling into Syria during a joint press conference in the Iranian capital Tehran on Saturday.

Salehi said that the West’s support for militants in Syria contradicted their claim of supporting human rights.

“I am amazed at how the Western [countries] who talk of [support for] human rights [can] give weapons to cannibals in Syria to increase their cannibalism,” he said.

He criticized the double standards of Western countries and said their justification to send arms to militants was totally unacceptable.

He added that the ongoing crisis in Syria must be resolved through a domestic solution, stressing that the people of Syria must determine their own fate.

The Lebanese foreign minister, for his part, said the continued unrest in Syria would destroy the country and its economy as well as the whole region.

“Sending arms to militants [in Syria] will not serve the interests of the people neither in Syria, nor the region. The move only prolongs the violence in the country,” Mansour added.