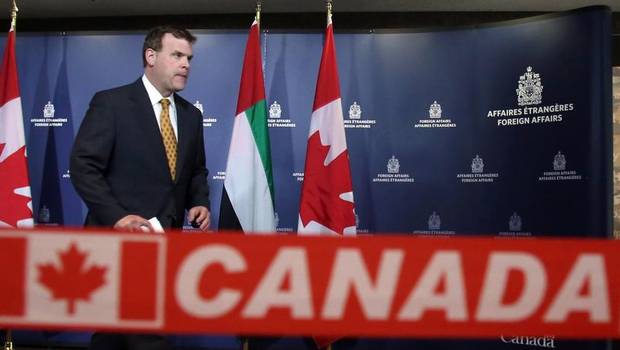 Canada’s foreign affairs minister is backing down from his dismissal of last week’s Iranian election as “meaningless” after a flood of complaints from Iranians and ex-patriates living abroad.

John Baird made the comments last weekend, at the same time as officials in the United States and Europe were issuing words of cautious praise for the vote that gave centrist candidate Hassan Rowhani the presidency. The outcome was viewed as an important step forward for reformers in Iran, who hope Mr. Rowhani will open up dialogue with other global leaders and help ease tensions over the country’s nuclear program.

On Friday, Mr. Baird wrote an open lettercongratulating Iranians on the outcome of the election and offering to support their demands for change.

“Only the people of Iran can determine the meaning of the elections, and an overwhelming number of Iranians used their vote to reject extremism, protest Khamenei’s regressive clerical military dictatorship, and express a deep desire for change,” Mr. Baird wrote.

Mr. Baird added that Canada wants to help to hold the regime accountable and will continue to call on the regime to respect human rights and fundamental freedoms.

The letter came one week after he issued a very different statement on the election, highlighting problems with the process used to choose the candidates and the regime’s refusal to allow peaceful assembly and freedom of association leading up to the vote.

“Given the regime’s manipulation of the collective will and democratic process, the results of the June 14 vote are effectively meaningless,” Mr. Baird said the statement.

Iranians and those in the diaspora quickly picked up on the comments, and Toronto blogger Aida Ahadiany posted a letter about the response that was circulated among the Iranian diaspora in Canada this week.

Pro-reformers acknowledge that the election was far from perfect: the regime’s Guardian Council approved only six candidates to run in last week’s presidential election and disqualified hundreds of others. But Mr. Rowhani was considered by many reformers to be the best hope for change among the group that was approved and he won with more than 50 per cent of the votes on the first ballot, beating out other, more conservative candidates.

Ms. Ahadiany said on Friday that she is relieved by the change in Mr. Baird’s tone. “Now it means he’s started to hear us.” She added that Mr. Baird’s letter gives her hope that Canada will step up efforts to work with people who are living in Iran and are currently involved in the reform movement.

Canada has funded efforts to connect reformers in the country with those in the diaspora through conferences and an online election-observation centre.

NDP foreign affairs critic Paul Dewar said Mr. Baird’s initial reference to the election as “meaningless” was offensive and added that he welcomed the apparent change in tone.

A spokesman for Mr. Baird said on Friday that the letter was meant to be an “elaboration” on the minister’s earlier comments, and not a retreat. “We found the act of voting [in Iran] courageous. That’s what carried meaning,” Joseph Lavoie said in an e-mail Friday afternoon. “But because Iranians didn’t have a real choice, the result, sadly, is meaningless.”

By The Globe and Mail