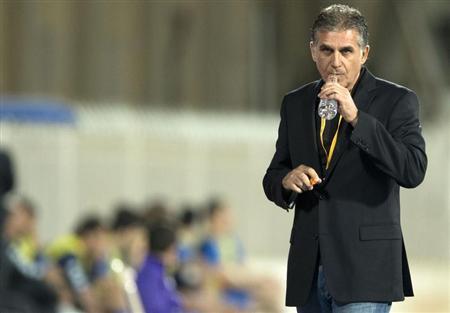 (Reuters) – Carlos Queiroz will stay on as Iran’s football coach through to the 2014 World Cup after leading the West Asians to Brazil, the Portuguese said on Friday.

“My contract is such that it goes step by step in accordance with the interests of the (Iranian) football federation,” the 60-year-old former Real Madrid manager was quoted as saying by the Fars news agency.

“After qualification to the World Cup it has now been extended until the end of this competition.”

Iran secured a fourth World Cup finals appearance on Tuesday by beating South Korea 1-0 in a match which was preceded by a war of words between Queiroz and Korea coach Choi Kang-hee, who quit after the defeat.

“The Korean coach created an unusual atmosphere before the match. In my 32 years of coaching, I’ve never encountered such an issue,” said Queiroz.

“Talk of war, revenge and blood is not normal. The Korean coach wanted to put our players under pressure with such talk but we used it to motivate our players.”