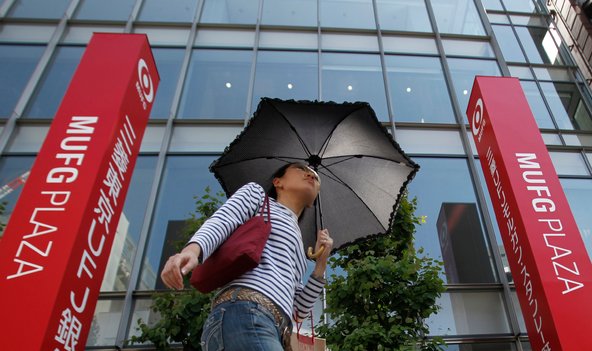 A branch of the Bank of Tokyo-Mitsubishi UFJ in Tokyo.

The state’s Department of Financial Services (DFS) said Mitsubishi-UFJ moved billions of dollars through its New York branch between 2002 and 2007 for state and private entities in Iran, Sudan and Myanmar, including entities on the US Treasury’s blacklist.

In that period banking services and money transfers fell under US sanctions on the three countries.

To hide them, the DFS said the bank employees “systematically” removed information from wire transfer messages that could have identified the parties involved.

In all, the bank handled nearly 28,000 illegal transactions worth $100 billion in violation of the law, according to the DFS.

“We have and will continue to take a hard line in rooting out misconduct at banks that threatens our national security,” Benjamin Lawsky, the state superintendent of financial services, said in a statement.

“Whenever and wherever we uncover serious wrongdoing, we will take strong enforcement action to protect our country from money laundering, terrorism, and other dangerous misdeeds.”

The bank agreed to the fine and to boost its compliance procedures and controls to prevent future violations, New York said in the statement.

The bank said in a statement that it had identified the violations itself in 2007, cooperated with the authorities, and “voluntarily and promptly ceased the practices.”

Last year London-based Standard Chartered Bank was fined $667 million by federal and New York state authorities for permitting hundreds of billions of dollars to be laundered through its US branch by clients from Iran, Myanmar, Libya and Sudan, in violation of US sanctions.

And earlier this week New York authorities fined a unit of accountancy Deloitte $10 million for its poor oversight in monitoring Standard Chartered’s compliance with sanctions restrictions.