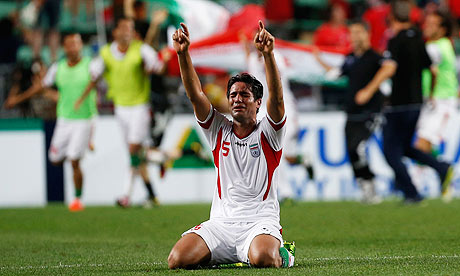 President-elect Hassan Rouhani has hailed Iran’s 1-0 victory over South Korea on Wednesday as an “introduction to bigger victories” for the Islamic Republic.

Rouhani said that the football victory, which qualifies Iran for the 2014 World Cup, heralded the “powerful presence of our nation on all fields”.

The President-elect also praised Iran’s youth for their displays of patriotism after the victory.

Our patriotic youth is one of our country’s biggest assets. #Brazil2014#victory #pridepic.twitter.com/O4ne0VCHEs

Rouhani’s rival, and secretary of the Supreme National Security Council Saeed Jalili also tweeted about Iran’s football win, calling it the “second victory in a week”:

Celebrations of the victory took place across Iran, including in the Sunni-majority province of Sistan Baluchistan:

Images from the celebrations in Tehran:

The victory was also front page headlines in Iranian dailies on Wednesday, including the hardline Kayhan newspaper, close to the Supreme Leader’s Office: 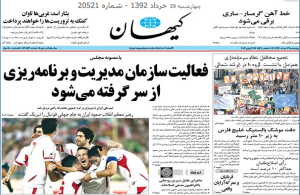 Hardline Mashregh News — famous for its reviews of Hollywood movies — brings its readers a lengthy expose of what it says are the worst excesses of American culture throughout history.

Even through the US voted in favor of the “Universal Declaration of Human Rights”, Mashregh says, the reality is very different. Washington’s human rights violations include excessive surveillance against citizens, Mashregh tells us, with the caption “Everywhere Is Under Surveillance”.

Mashregh uses this photograph to illustrate what it says is Washington’s policy that all America citizens are terrorists who must be watched: 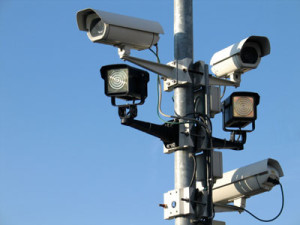 Perhaps the best illustration Mashregh offers of the ills of contemporary US society is this image, which it uses to illustrate its assertion that American children have easy access to both firearms and knives: 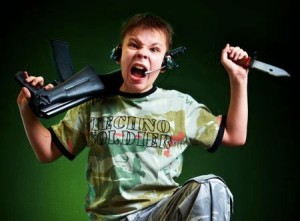