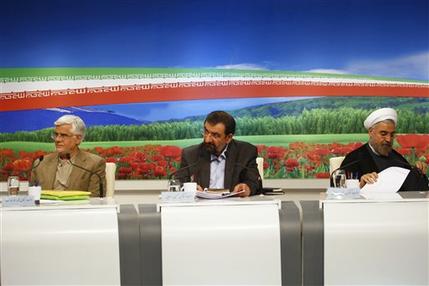 In light of recent declarations, mystery surrounds who is speaking in Iran’s name

Piecing together the mystery of Iranian nuclear strategy suggests that right now, the Islamic Republic is perhaps willing to speed up negotiations without preconditions and with greater transparency.

It’s commonly thought that Supreme Leader Ali Khamenei is responsible for all matters concerning Iran’s nuclear program, while the talks with the the five permanent members of the UN Security Council plus Germany are handled by Saeed Jalili, the national security adviser and chief nuclear negotiator.

Iran has never appointed an official spokesman to explain its positions, let alone its nuclear plans. That’s why many people were surprised by the recent declaration by Russian Foreign Minister Sergey Lavrov that Iran was willing to suspend its 20-percent uranium enrichment.

Is this Iran’s position? Iran’s two official news agencies, Fars and Mehr, quoted Lavrov’s demand that the sanctions against Iran gradually be lifted. They also reported his position on Syria. But they didn’t mention any suspension of uranium enrichment. Instead, they devoted banner headlines to Iran’s victory over South Korea’s national soccer team, proudly announcing that this was Iran’s ticket to the 2014 World Cup in Brazil.

At the same time, it seems hardly likely that Lavrov would make such a dramatic declaration if it were groundless. According to reports from the Iranian opposition a few months ago, President-elect Hasan Rowhani was sent to Kazakhstan by Khamenei in February on the eve of the dialogue between Iran and the P5+1.

Did he talk with the Russians about the regime’s intentions to adopt a new policy after the presidential election? Is the tough Iranian position at the talks in Kazakhstan and Istanbul targeted at domestic political goals, once Iran understood that there was no danger of an attack on its nuclear installations before the election?

The answers to these questions will become clearer later; in the meantime, it appears Lavrov’s statement contradicts Rowhani’s declaration that Iran would continue to enrich uranium. At the same time, at a press conference Monday, Rowhani made no reference to the extent of uranium enrichment or on the amount of uranium that would be enriched.

There is a consensus in the West that uranium enrichment to 3.5 percent cannot be regarded as a threat or as a violation of the Treaty on the Non-Proliferation of Nuclear Weapons. According to a report by the International Atomic Energy Agency in February, Iran has around six tons of uranium enriched to 3.5 percent and, since February 2011, has enriched 280 kilograms of uranium to 20 percent.

The West is demanding that uranium enrichment not exceed 20 percent and that Iran’s supply of enriched uranium be transferred abroad. Iran rejects this demand, and Lavrov’s declaration doesn’t make clear whether Iran has given Russia a commitment on suspending uranium enrichment, how long a suspension might be be maintained, and under what conditions.

The nuclear talks with Iran are expected to be renewed in August, after Rowhani is officially installed as president. Still, a spokesman for the Iranian Foreign Ministry said Tuesday Iran would be willing to start the talks earlier if asked to do so.

This declaration also represents a change in Iran’s handling of the talks, after they were frozen between 2009 and 2011 and were again frozen for more than a year. Today it seems Iran is willing to speed up the negotiations, that it’s not presenting any conditions for their renewal ‏(at least for now‏) and that Tehran, according to Rowhani, is prepared for greater transparency and possibly even tighter supervision.