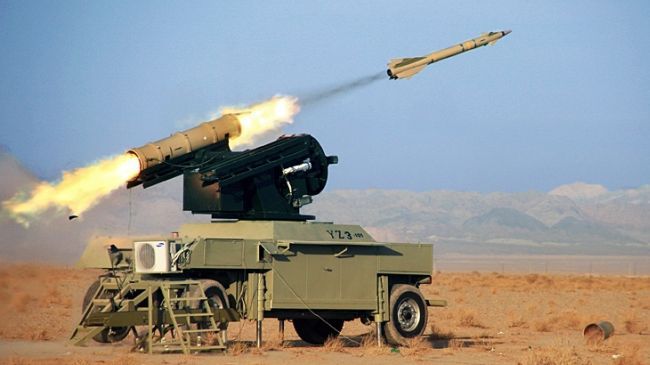 “When in its second test the Persian Gulf missile hit a moving vessel with 30m precision, we felt to have made a great success,” Hajizadeh said.

“When we explained the achievement to the Supreme Leader, His Excellency voiced pleasure in the increased precision of the missile, but demanded us to increase its precision capability to less than 10-15 meters,” he added.

“Less than 6 months later, our experts improved the precision capability of this missile to less than 8.5m,” Gen. Hajizadeh continued.

“And when the Persian Gulf missile came into operation in the IRGC Navy, the countdown started for the trans-regional countries to end the mission of their warships,” the IRGC Aerospace commander stressed.

The supersonic projectile, which carries a 650-kilogram payload, is smart and immune to interception, and features high-precision systems.

The Persian Gulf supersonic ballistic missile is the most advanced and most important missile of the Islamic Revolution Guards Corps (IRGC) Navy.

The distinctive feature of the missile lies in its supersonic speed and trajectory. While other missiles mostly traverse at subsonic speeds and in cruise style, the Persian Gulf moves vertically after launch, traverses at supersonic speeds, finds the target through a smart program, locks on the target and hit it.

the missile could successfully hit a mobile target one-tenth of an aircraft carrier in its early tests.

In early 2011, Iran started the mass-production of the Persian Gulf anti-ship missile which is designed to destroy targets and hostile forces at sea.

“The Khalij-e Fars missile has been developed somehow different from the usual trend and can change the equations on which the enemy most relies,” Fadavi said at the time.

Referring to Iran’s missile power, he said that the Islamic Republic of Iran is now in possession of home-made missiles with the range of over 200km which can be mounted on Iranian high-speed boats.

In July 2012, Iran’s Persian Gulf missiles displayed their 100 percent precision capability after hitting and destroying the specified targets in the last phase of the Payambar-e Azam 7 (The Great Prophet 7) drills.

“The Persian Gulf missile precisely hit and destroyed the target which was several times smaller than the marine targets which can pose a threat,” Commander of the IRGC Aerospace Force Brigadier General Amir Ali Hajizadeh said at the end of the last phase of the wargames on July 4, 2012.