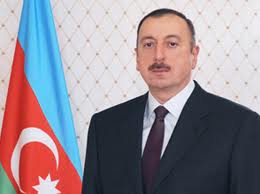 “These relations are based on the will of our peoples, who historically have lived in an atmosphere of good neighborhood and friendship. Our peoples are bound together by shared spiritual values and traditions, as well as mutual trust and confidence, which have stood the test of time,” Aliyev said in his message to Rohani on Sunday.

“I am confident that we will further make joint efforts to successfully continue our intergovernmental relations, which were established on solid foundations, and bilateral and multilateral cooperation in the best interests of our countries and peoples,” the message read.

Meanwhile, Azeri Foreign Ministry Spokesman Elman Abdullayev praised bilateral relations between Iran and Azerbaijan, calling for the further enhancement of cordial ties between the two countries in the future.

Stressing Baku’s resolve to expand relations with Iran, Abdullayev said Iran and Azerbaijan are two neighboring countries whose cultural and historical similarities bind them together.

Nearly 50.5 million Iranians, including more than 1.6 million first-time voters, were eligible to participate in the June 14 presidential election. The Interior Ministry put the voter turnout at 72.7 percent.